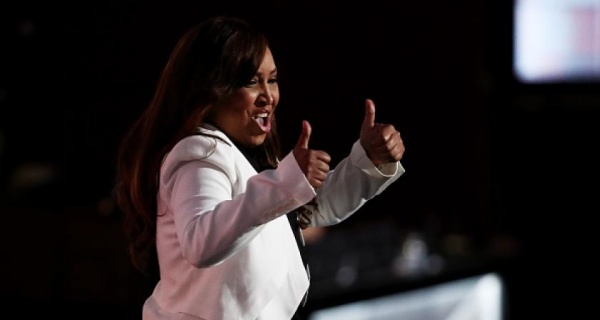 Here’s something you might want to send to your nearest Trump supporting family member the next time you hear them say Trump is “draining the swamp”: When it came time to hire the person who would control the multi-billion dollar New York/New Jersey housing department, he went with his son’s wedding planner – a woman with zero experience in housing and who is currently mixed up in Eric Trump’s charity fraud scandal.

With the exception of Trump’s golf caddie (who now runs his social media presence from the White House), it’s safe to say that nobody has gained as much by Trump’s rise as Lynne Patton. Prior to Trump winning* the election, Patton was an event planner responsible for organizing parties from rich people. She helped the Trumps host golf tournaments, organized upscale events, and planned Eric Trump’s wedding.

She has shown zero interest in public service, nor does she have any experience in housing or urban development. Her only qualification is that she is loyal to Trump. It appeared that was enough. Trump appointed her to “head up the U.S. Department of Housing and Urban Development’s Region II, which includes New York and New Jersey, where she’ll oversee distribution of billions of taxpayer dollars,” according to the New York Daily News.

Overseers should probably keep a close eye on the billions she’s about to get her hands on. Patton is involved in the “charity” golf tournaments that investigators say Eric Trump and his father used to skim $1.3 million from for their own personal gains. At the time, Eric bragged about hosting the event for charity at his father’s golf course by saying it was great because the Trumps had donated the course for the day – in reality, according to a detailed investigation by Forbes, they were charging their donors major bucks for the “privilege” of using it for charity:

In reviewing filings from the Eric Trump Foundation and other charities, it’s clear that the course wasn’t free–that the Trump Organization received payments for its use, part of more than $1.2 million that has no documented recipients past the Trump Organization. Golf charity experts say the listed expenses defy any reasonable cost justification for a one-day golf tournament.

Additionally, the Donald J. Trump Foundation, which has come under previous scrutiny for self-dealing and advancing the interests of its namesake rather than those of charity, apparently used the Eric Trump Foundation to funnel $100,000 in donations into revenue for the Trump Organization.

Making matters worse, Patton appears to be a serial liar. In the course of vetting her, reporters discovered she had lied about at least two things on her resume. She falsely claimed she received a juris doctorate from Quinnipiac University School of Law. She also claimed she went to Yale, which, again, appears to be completely fabricated.

Trump’s obsession with stocking his administration with “loyalists” means he limits himself to only the yes-men (and women), hanger ons, and opportunists who attach themselves to Trump and properly inflate his ego. It leaves him with little choice but to pick from among the least qualified and most unethical people in the country to head jobs that would otherwise go to extremely serious and intelligent applicants. The result is this: incompetence mixed with dishonesty mixed with inexperience.