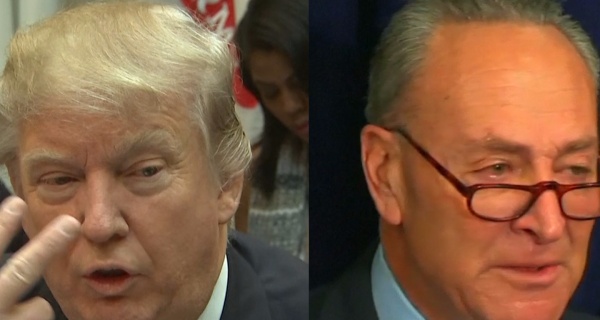 Donald Trump’s presidency is falling apart. Between the Russia investigations, his falling approval numbers and the fact that he’s alienating nearly every ally we have, poor little Donny is in desperate need of some good news. So what does every dictator worth his salt do? Forces his staff to compliment him.

On Tuesday, Trump let cameras into this very weird cabinet meeting, where after praising himself by saying that few presidents have passed more legislation than him, which is flat-out not true, he went around the table where, surprise, cabinet members also praised him.

It didn’t take long for Senate Majority Leader Chuck Schumer to mock Trump. He put out a video with his staff praising his performance on the Sunday news shows. One staffer even complimented his hair. The last staffer was more general, saying that he loved working for Schumer and for his agenda. That’s when Schumer lost it. He cracked up and stopped the tape before the last person at the table was able to speak.

This, my friends, is the difference between Trump and a true leader. Trump demands loyalty while Schumer seems to believe he needs to earn it. Schumer has a sense of humor about his job while Trump has none, about anything. Nothing says you’re insecure in your abilities than forcing underlings to give you praise.