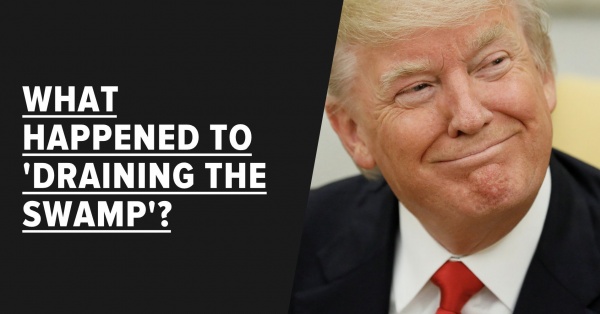 During the campaign, President Trump declared, “On the first day in office, my administration will immediately take steps to clean up the corruption in Washington, D.C.” A week into his presidency, he began making good on this promise by signing an executive order that added loopholes to the Obama-era ethics policy. Then he hired many lobbyists, lawyers, and consultants to work throughout his administration, granted them ethics waivers in secret, and went to war with the Office of Government Ethics when it tried to make them public.

On Wednesday the White House partially gave up that battle when it posted documents pertaining to the White House staff (but not all federal agencies, as OGE wanted). They reveal that during his first four months in office, Trump has granted waivers to at least 16 White House staff members. For comparison, President Obama issued three waivers to his staffers in the same period. During his entire eight years in office, Obama granted 16 waivers for White House employees, and about 70 throughout the federal government.

Waiver recipients include several top figures in the Trump administration. White House chief of staff Reince Priebus and counselor to the president Kellyanne Conway were cleared to work with their former clients and employers.

Another waiver allows all Trump aides to “participate in communications and meetings with news organizations on matters of broad policy” even if they involve “a former employer or former client.” That means chief strategist Steve Bannon is free to contact Breitbart employees, though he was still running the company last year.

Waivers also went out to four former lobbyists. Shahira Knight, who is a special assistant for tax and retirement policy, was a lobbyist for Fidelity Investments before joining the administration. Andrew Olmem, a special assistant to the president for financial policy, lobbied on behalf of several big banks and lenders. Former energy lobbyist Michael Catanzaro is now advising the Trump administration on topics like emissions regulations and renewable fuel standards. Joshua Pitcock, Vice-President Mike Pence’s chief of staff, was cleared to work with current Indiana state officials though he’s lobbied for the state.

Six former employees of the law firm Jones Day, including White House counsel Don McGahn, were given waivers to communicate with former colleagues, as the firm still represents Trump.

White House spokeswoman Lindsay Walters said the documents were released as “part of the president’s commitment to the American people to be transparent” (though he tried to block their release). Walters also said only a limited number of waivers were issued because “to the furthest extent possible, counsel worked with each staffer to recuse from conflicting conduct rather than being granted waivers.”

Noah Bookbinder of Citizens for Responsibility and Ethics in Washington told Politico that the disclosures just confirm that the Trump administration is rife with ethical concerns.

“No one has believed for months that this president or his administration had any interest in ethics, but these waivers make clear the remarkable extent to which they are comfortable mixing their own personal interests with the country’s,” he said. “It’s no wonder they waited for the cover of night to release them.”