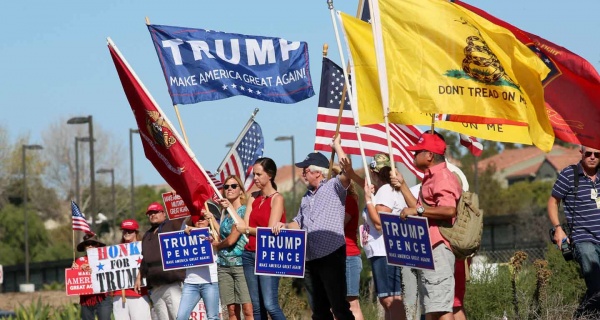 The Trump administration unveiled a budget for 2018 on Tuesday that seeks to overhaul many of the country's safety-net programs for low-income and struggling Americans. Though these cuts are popular among Republican lawmakers, they affect programs that are actually more commonly used in Republican-leaning states than in Democratic ones, and that in many cases benefit white voters without college degrees — a demographic group that strongly supported President Donald Trump in the 2016 election.

The programs experiencing the deepest cuts provide assistance for health care services to children, the poor and disabled, and that supplement food and housing for those with low incomes. Most of the programs were created decades ago by Democratic presidents.

The president's budget reduces funding to the current welfare system and would impose more stringent work requirements as a condition of receiving benefits. The work requirement is popular among conservative think-tanks and has been frequently promoted by House Speaker Paul Ryan. The budget remains a wish list, however; many of its more draconian provisions are not widely popular in Congress and are considered likely to be rejected or changed.

NBC News examined the states with populations that benefit the most from the programs and would experience cuts under the proposed budget. The maps below are colored to show where those populations live.

The president's budget cuts $193 billion from food stamps, a program (now known as the Supplemental Nutrition Assistance Program, or SNAP) that provides extra money for food and groceries. Over the next 10 years, that amounts to a cut of 29 percent. More than 40 million Americans receive food stamp benefits.

In order to achieve cost savings, the proposed changes add a work requirement for receiving benefits. "If you are on food stamps and you are able-bodied, we need you to go to work," said budget director Mick Mulvaney during a White House briefing on Monday.

The budget is not specific on how the work requirements will be implemented, but past examples cited by conservative think tanks provide a guide. All states in fact already have a work requirement for food stamps, though some have been granted waivers. Reforms to work requirements have focused on making requirements more strict, similar to Maine's recent policy changes, or nullifying waivers given to areas with higher unemployment.

Participation in the food stamp program is higher in the Rust Belt and the South. Areas that are more rural, with higher unemployment and periods of prolonged unemployment, are more likely to use food stamps and be hard-hit by a work requirement.

As NBC News has reported, Medicaid, which pays for health care for children and the disabled, is one of the hardest programs to cut. The expansion of the program under President Obama's health care program are popular and have been a critical sticking point during the House's efforts to repeal and replace Obamacare.

Trump's budget makes $616 billion in cuts to Medicaid over 10 years, in addition to the $880 billion in cuts already in the House's health care bill, by changing the program's funding formula and rolling back the expansions provided by Obamacare. Combined, this amounts to a more than 25 percent cut to Medicaid and CHIP. The Congressional Budget Office estimated at least 10 million people would lose health insurance in an earlier scoring of the House's health care bill.

The changes in the bill will have profound effects in states that expanded Medicaid, which tend to vote Democratic. Many Republican states elected not to expand Medicaid following a successful Supreme Court challenge to Obamacare, but those states will also experience cuts. All states that did not expand Medicaid will see cuts to the program because of substantial changes to the funding formula.

On the campaign trail, the president promised that Social Security would not be touched. But the component of Social Security that helps those with disabilities is cut back in his budget. Almost 10 million people rely upon Social Security Disability Insurance. Trump's budget cuts the program by 2 percent over 10 years.

The map of these beneficiaries is similar to the food stamps map. Residents of battleground states won by Trump, including West Virginia, Florida, Ohio and Michigan, are more likely to be recipients. SSDI also tends to be critical to areas that experience high rates of injury during manual labor, like the Rust Belt, or in rural areas with more agricultural production, according to Jacob Leibenluft, senior adviser at the Center on Budget and Policy Priorities.

The TANF program, which mostly provides low-income assistance for food, utilities, housing, childcare and job-related expenses, is cut by $21 billion over 10 years in the president's budget. Trump's budget cuts TANF by 13 percent over that time span.