Georgia Congressional Race Likely To Be Most Expensive Ever 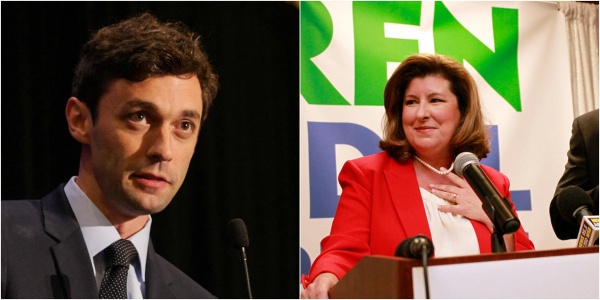 As the special election to fill the Georgia House seat vacated by Health and Human Services Secretary Tom Price steams toward the climactic June 20 runoff, it’s now certain to set a record as the most expensive House race ever.

The two campaigns and their partisan allies have already spent about $26 million on TV ads alone, with nearly a month left. The total spending is roughly even, with Jon Ossoff’s heavy small-donor-based campaign spending being balanced by the national GOP groups — particularly Paul Ryan’s Congressional Leadership Fund — running ads for Karen Handel. As NPR reports:

So far, the candidates and outside groups are on track to spend at least $30 million just on TV ads.

For context, that’s more than a third of the roughly $75 million President Trump’s campaign spent on ads during the nationwide general election.

Georgians are unaccustomed to this kind of media barrage, with the Peach State not being a presidential battleground state lately, and statewide and congressional races not generally hosting insanely wealthy self-funding candidates. My own stepmother and brother live in Georgia’s Sixth District (as did I off and on for decades), and they report personal campaign contacts on a mind-boggling level, in addition to the endless pounding of TV ads. It could spur voters to go to the polls early to get rid of the canvassers, and/or could produce even higher turnout than in the April 18 primary.

There has been very limited public polling since the primary, but a new Survey USA poll shows Ossoff up 51-44 among likely voters. When in-person early voting begins on May 30, we’ll get a better idea of how well the two campaigns are doing in terms of mobilizing their voters. But no matter what happens, it seems the widespread early predictions — including my own — that the GOP would likely win the special election because voters favoring a Democratic candidate simply would not show up did not take into account the “special” nature of this Trump-dominated off-year election cycle.

The contest will almost certainly be close, but at the moment it looks like it may be Jon Ossoff’s to lose.