What Are The Obamas Up To Now? 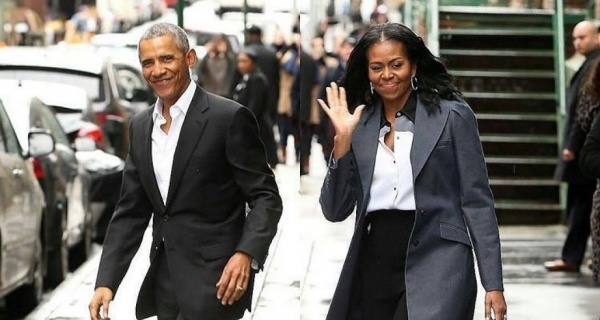 After eight years of living at the epicenter of a tightly controlled bubble, Barack and Michelle Obama seem to savor the little things most now that their historic White House tenure has ended.

For Michelle, it’s the chance to pop into a Soul Cycle class, pack her own bag lunch (turkey chili is a favorite) and eat with her staff while laughing over viral videos in their new work space in D.C.’s West End, where her office is painted the same warm salmon pink of her old East Wing digs.

For Barack, it’s the opportunity to dust off the leather jacket that stayed hidden in his closet for years because he didn’t think it was presidential enough to wear while in office.

“Imagine putting on a suit and tie almost every day for eight years. I think he enjoys not having to do that,” Barack’s chief of staff, Anita Breckenridge, tells PEOPLE in this week’s issue, which offers an inside look at the former first couple’s post White House life.

Although the pair employ a staff of 20, and have secured book deals reportedly worth at least $60 million, sources close to the couple say they are enjoying the opportunity to be a bit more low-key — and spontaneous — now that they are no longer within the confines of 1600 Pennsylvania Ave.

Breckenridge explains that while president, Barack “couldn’t just decide that … ‘there’s Central Park; we’re going to walk across the street.’ It just didn’t work that way. It required hours of security and logistical planning, and now that’s not really the case. If he wants to go out to dinner on a Saturday, that doesn’t take teams of people and hours of advance. You know? That’s really freeing. So, the perimeter of the bubble has shrunk in a way that just allows him to feel a little bit more normal.”

But less than four months after the inauguration of President Donald Trump, there are still some things the former president cannot do — namely, driving.

“He hasn’t been able to drive, and probably won’t for awhile,” says Breckenridge. “The bubble’s still there, but you can’t underestimate not having a press pool or a large motorcade: It all feels significantly smaller.”

Case in point? Barack himself is now fumbling to operate the coffeemaker, and friends and colleagues are dumbstruck when they ring the doorbell at the couple’s new D.C. rental home and Michelle herself appears.

“I went over there and you just walk up and think, ‘Do I ring the doorbell? Do I not?’ ” says Tina Tchen, Michelle’s chief of staff while in the White House. “There’s a Secret Service agent out front and I’m looking at him and he says, ‘No, you’re at the right door.’ And [Michelle] just opens the door. It was a little unusual not to be cleared through five security gates and ushered up the elevator … I rang the bell just like a normal person and she answered it just like a normal person.”

Barack too seems to enjoy little moments of normalcy, like when he innocently gave the Secret Service the slip during a March golf outing at the Mid-Pacific Country Club in Kailua, Hawaii, and followed manager Jim Swieter into the shop for some Band-Aids.

“The Secret Service didn’t catch that,” recalls Swieter. “They looked around and he was all of a sudden gone. I get the feeling he likes the freedom now.”

The former president is also reveling in the freedom to make last-minute dinner plans with pals, and a source who met Michelle recently said the former first lady appears “relaxed and happy” in her new role outside of the White House.

“And you could tell that two glasses of wine in, it would get even better.”