If You Care About Voting Rights, Get Familiar With The Name 'Kris Kobach' 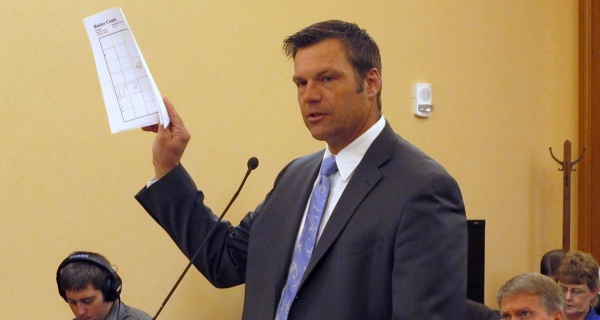 He goes by many names. The director of the American Civil Liberties Union’s Voting Rights Project refers to him as “the king of voter suppression.” Kansas’ state Senate minority leader called him “the most racist politician in America today.” Until the newly written Muslim ban goes into effect, he still holds the title of “architect of the most racist law in modern American history.”

His name is Kris Kobach, and the Day-Glo douche nozzle we now call Mr. President recently signed an executive order empowering Kobach to lead a presidential commission to advise him on voter fraud.

Kris Kobach is no ordinary racist politician. While he nominally serves as Kansas’ secretary of state, Kobach has traveled around the country as what the Southern Poverty Law Center calls “the lawyer for America’s nativist movement.” He hopscotched from state to state writing photocopied versions of his anti-immigrant “Papers please” law before numerous courts rejected them as too racist. After 9/11, he created a program to register and fingerprint Muslims. He believed that President Barack Obama was keeping black people out of jail. He works for a hate group (no, not the Republican Party).

On Thursday, Trump signed an executive order establishing a “Presidential Advisory Commission on Election Integrity.” Basically, the president created a Scooby-Doo! Mystery Incorporated ghost-hunting team to back up his baseless claims that millions of people illegally voted in the 2016 presidential election. To lead the commission, Trump named Kobach as the commission’s vice chairman (Vice President Mike Pence is the actual chairman, but if there’s another woman eating in the room, you know he has to leave).

Who Is Kris Kobach?

Imagine meeting Satan at a party. Now imagine that—after a few drinks— the devil told you how he graduated as valedictorian from a Kansas high school, went to Harvard and graduated first in his class, then got a master’s degree and doctorate from Oxford before completing Yale Law School. Then, when you were congratulating Beelzebub on his unprecedented academic achievements, just before returning back into the fiery depths of hell, the devil turned and said, “Oh, I know another guy who achieved the exact-same things, but he’s waaaay more racist than I am.”

That other guy is Kris Kobach.

Why Do You Think Kris Kobach Is a Racist?

Wait ... for legal reasons, I want to make this clear: No one here has ever called Kris Kobach a racist. Kris Kobach might have love for all mankind buried deep in his heart (and I mean very, very, very deep). While it is impossible to ascertain what he believes, one fact of Kobach’s professional history is unshakable:

Kris Kobach does racist things. In fact, many of the racist proposals put forth by Trump didn’t originate from the gargoyle bobblehead of Steve Bannon. They were the brainchild of Kris Kobach.

Like the idea of a Muslim registry. After the Sept. 11, 2001, attack, Kobach worked as Then-Attorney General John Ashcroft’s chief adviser on immigration and border security. According to the SPLC, Kobach helped “create a program that required tens of thousands of Muslim and Middle Eastern visa holders and visitors to register with the government and be fingerprinted.” Called the National Security Entry-Exit Registration System, it made immigrants from 25 Muslim countries submit to interrogation and fingerprints annually.

While at the White House, Kobach wrote a memo that would eventually become known as the “Papers please” law. Although the law became famous in Arizona as S.B. 1070, Kobach tailored the law for different state legislatures, including Alabama’s, Mississippi’s and Georgia’s. The law cost taxpayers millions of dollars in legal fees and was dismantled by appeals courts across the country. The proposal not only gave authorities the right to arrest anyone who couldn’t prove they were a U.S. citizen but also forced undocumented immigrants to prove their citizenship before signing leases; kicked their children out of school; and invalidated any contract they signed.

Before Trump complained about elections being “rigged,” Kobach helped create Interstate Crosscheck—a database that sought to purge voter rolls in 28 states. If judges had allowed states to use Crosscheck, it would have disenfranchised 1 out of every 7 black voters.

In September, a federal appeals court slapped him down again after he convinced Kansas, Alabama and Georgia to pass laws forcing people to show proof of citizenship when filling out federal voter forms.

Kobach works for the legal arm of the Federation for American Immigration Reform, or FAIR, which was founded by anti-immigrant, white supremacist John Tanton, who wrote in a Dec. 10, 1993, letter to eugenicist and ecology professor Garrett Hardin (now deceased):

Not only is Kobach employed by an organization categorized as a hate group by the Southern Poverty Law Center and a “radical ... fringe organization” by others, but in 2015 he spoke at a “writers workshop” for the white nationalist publishers the Social Contract Press.

So Why Did Trump Choose Kobach?

Trump choosing Kobach to lead a commission looking into voter fraud is like someone asking Rachel Dolezal to stop people from wearing blackface. Kobach has been working to reduce minority voting for his entire professional career.

Trump selected Kobach because despite all the voter-suppression efforts you read about during the 2016 election, most were unsuccessful. Judges struck down voter-ID laws. Courts issued injunctions against purging voter rolls. But Kobach used a Trump-like technique so bold that the Donald was forced to take notice:

Kansas’ voter-registration computers at the state’s Department of Motor Vehicles offices curiously stopped working in October, so when people brought their registration to the polls, as secretary of state in Kansas, Kobach threw thousands of provisional ballots into the garbage, even though some belonged to people who had proof they were registered voters. It was a move as bold as firing the director of the FBI while he is investigating a crime you committed ...

But, of course, no one is crazy enough to do that.

We know what happens next. We’ve seen it a million times in every phase of American history. Kris Kobach will do with voter fraud what his predecessors did with terrorism, crime, white unemployment, drugs, the economic downturn, the education decline, rising health costs and every other blight on American society:

He will find a way to blame it on brown people.

Even Satan knows that.