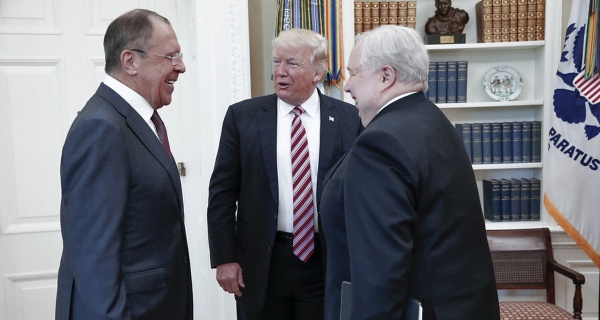 President Trump revealed highly classified information to the Russian foreign minister and ambassador in a White House meeting last week, according to current and former U.S. officials, who said Trump’s disclosures jeopardized a critical source of intelligence on the Islamic State.

The information the president relayed had been provided by a U.S. partner through an intelligence-sharing arrangement considered so sensitive that details have been withheld from allies and tightly restricted even within the U.S. government, officials said.

The partner had not given the United States permission to share the material with Russia, and officials said Trump’s decision to do so endangers cooperation from an ally that has access to the inner workings of the Islamic State. After Trump’s meeting, senior White House officials took steps to contain the damage, placing calls to the CIA and the National Security Agency.

“This is code-word information,” said a U.S. official familiar with the matter, using terminology that refers to one of the highest classification levels used by American spy agencies. Trump “revealed more information to the Russian ambassador than we have shared with our own allies.”

The revelation comes as the president faces rising legal and political pressure on multiple Russia-related fronts. Last week, he fired FBI Director James B. Comey in the midst of a bureau investigation into possible links between the Trump campaign and Moscow. Trump’s subsequent admission that his decision was driven by “this Russia thing” was seen by critics as attempted obstruction of justice.

One day after dismissing Comey, Trump welcomed Russian Foreign Minister Sergei Lavrov and Ambassador Sergey Kislyak — a key figure in earlier Russia controversies — into the Oval Office. It was during that meeting, officials said, that Trump went off script and began describing details of an Islamic State terrorist threat related to the use of laptop computers on aircraft.

For almost anyone in government, discussing such matters with an adversary would be illegal. As president, Trump has broad authority to declassify government secrets, making it unlikely that his disclosures broke the law.

“The president and the foreign minister reviewed common threats from terrorist organizations to include threats to aviation,” said H.R. McMaster, the national security adviser, who participated in the meeting. “At no time were any intelligence sources or methods discussed, and no military operations were disclosed that were not already known publicly.”

But officials expressed concern about Trump’s handling of sensitive information as well as his grasp of the potential consequences. Exposure of an intelligence stream that has provided critical insight into the Islamic State, they said, could hinder the United States’ and its allies’ ability to detect future threats.

“It is all kind of shocking,” said a former senior U.S. official who is close to current administration officials. “Trump seems to be very reckless and doesn’t grasp the gravity of the things he’s dealing with, especially when it comes to intelligence and national security. And it’s all clouded because of this problem he has with Russia.”

In his meeting with Lavrov, Trump seemed to be boasting about his inside knowledge of the looming threat. “I get great intel. I have people brief me on great intel every day,” the president said, according to an official with knowledge of the exchange.

Trump went on to discuss aspects of the threat that the United States learned only through the espionage capabilities of a key partner. He did not reveal the specific intelligence-gathering method, but he described how the Islamic State was pursuing elements of a specific plot and how much harm such an attack could cause under varying circumstances. Most alarmingly, officials said, Trump revealed the city in the Islamic State’s territory where the U.S. intelligence partner detected the threat.

The Washington Post is withholding most plot details, including the name of the city, at the urging of officials who warned that revealing them would jeopardize important intelligence capabilities.

“Everyone knows this stream is very sensitive, and the idea of sharing it at this level of granularity with the Russians is troubling,” said a former senior U.S. counterterrorism official who also worked closely with members of the Trump national security team. He and others spoke on the condition of anonymity, citing the sensitivity of the subject.

The identification of the location was seen as particularly problematic, officials said, because Russia could use that detail to help identify the U.S. ally or intelligence capability involved. Officials said the capability could be useful for other purposes, possibly providing intelligence on Russia’s presence in Syria. Moscow would be keenly interested in identifying that source and perhaps disrupting it.

Russia and the United States both regard the Islamic State as an enemy and share limited information about terrorist threats. But the two nations have competing agendas in Syria, where Moscow has deployed military assets and personnel to support President Bashar al-Assad.

“Russia could identify our sources or techniques,” the senior U.S. official said.

A former intelligence official who handled high-level intelligence on Russia said that given the clues Trump provided, “I don’t think that it would be that hard [for Russian spy services] to figure this out.”

At a more fundamental level, the information wasn’t the United States’ to provide to others. Under the rules of espionage, governments — and even individual agencies — are given significant control over whether and how the information they gather is disseminated, even after it has been shared. Violating that practice undercuts trust considered essential to sharing secrets.

The officials declined to identify the ally but said it has previously voiced frustration with Washington’s inability to safeguard sensitive information related to Iraq and Syria.

“If that partner learned we’d given this to Russia without their knowledge or asking first, that is a blow to that relationship,” the U.S. official said.

Trump also described measures that the United States has taken or is contemplating to counter the threat, including military operations in Iraq and Syria, as well as other steps to tighten security, officials said.

The officials would not discuss details of those measures, but the Department of Homeland Security recently disclosed that it is considering banning laptops and other large electronic devices from carry-on bags on flights between Europe and the United States. The United States and Britain imposed a similar ban in March affecting travelers passing through airports in 10 Muslim-majority countries.

Trump cast the countermeasures in wistful terms. “Can you believe the world we live in today?” he said, according to one official. “Isn’t it crazy?”

Lavrov and Kislyak were also accompanied by aides.

A Russian photographer took photos of part of the session that were released by the Russian state-owned Tass news agency. No U.S. news organization was allowed to attend any part of the meeting.

Senior White House officials appeared to recognize quickly that Trump had overstepped and moved to contain the potential fallout.

Thomas P. Bossert, assistant to the president for homeland security and counterterrorism, placed calls to the directors of the CIA and the NSA, the services most directly involved in the intelligence-sharing arrangement with the partner.

One of Bossert’s subordinates also called for the problematic portion of Trump’s discussion to be stricken from internal memos and for the full transcript to be limited to a small circle of recipients, efforts to prevent sensitive details from being disseminated further or leaked.

Trump has repeatedly gone off-script in his dealings with high-ranking foreign officials, most notably in his contentious introductory conversation with the Australian prime minister earlier this year. He has also faced criticism for seemingly lax attention to security at his Florida retreat, Mar-a-Lago, where he appeared to field preliminary reports of a North Korea missile launch in full view of casual diners.

U.S. officials said that the National Security Council continues to prepare multi-page briefings for Trump to guide him through conversations with foreign leaders, but that he has insisted that the guidance be distilled to a single page of bullet points — and often ignores those.

“He seems to get in the room or on the phone and just goes with it, and that has big downsides,” the second former official said. “Does he understand what’s classified and what’s not? That’s what worries me.”

Lavrov’s reaction to the Trump disclosures was muted, officials said, calling for the United States to work more closely with Moscow on fighting terrorism.

Kislyak has figured prominently in damaging stories about the Trump administration’s ties to Russia. Trump’s first national security adviser, Michael Flynn, was forced to resign just 24 days into the job over his contacts with Kislyak and his misleading statements about them. Attorney General Jeff Sessions was forced to recuse himself from matters related to the FBI’s Russia investigation after it was revealed that he had met and spoke with Kislyak, despite denying any contact with Russian officials during his confirmation hearing.

“I’m sure Kislyak was able to fire off a good cable back to the Kremlin with all the details” he gleaned from Trump, said the former U.S. official who handled intelligence on Russia.

The White House readout of the meeting with Lavrov and Kislyak made no mention of the discussion of a terrorist threat.

“Trump emphasized the need to work together to end the conflict in Syria,” the summary said. The president also “raised Ukraine” and “emphasized his desire to build a better relationship between the United States and Russia.”