Trump Continues To Embarrass Himself And The Country 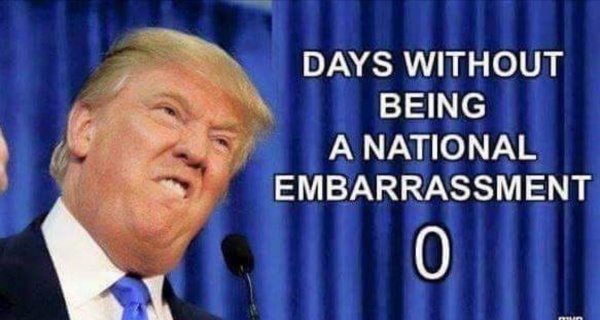 We have proof once again that a person can have vast wealth and yet is ignorant. Donald Trump has once again embarrassed himself and embarrassed the Nation. This is starting to be a regular event. Trump is not an actor in a comedy skit and his antics are not funny. Being President is as serious as it gets in life, and we've elected a clown.

For those who may read the first line and scan the article looking for fodder for an email rant, please scan the dictionary definition of ignorant from the Oxford Dictionary of the English Language.

You get the point.

I’m sure there are those Psychology hobbyists who will want to argue whether he is just ignorant, or ignorant and insane. I’m not a licensed therapist and insane is a medical diagnosis. I’ll stay away from that one because it is just slinging pejoratives and I’d prefer to have solid ground to back up my arguments.

Andrew Jackson is not a President to admire, yet Trump seems to love him. He even had Jackson’s portrait hung in the Oval Office. Jackson was a slave owner. If he saw the Civil War coming, and he was pissed off about it then it was because he was going to lose his slaves.

Maybe Trump is a psychic medium and contacted Jackson from the Great-Beyond since Jackson died 16 years before the Civil War. There is no historical evidence he saw any change coming.

Patricians think of Jackson as ignorant and unsophisticated. Well, that fits Donald Trump; maybe that is why he admires Jackson? At one time, Jackson was viewed by the Democratic Party as a champion fighting against special interests. Taking a look at President Trump’s cabinet shows that is something the two men clearly don’t have in common. Trump drained the swamp and brought them into the Administration.

Jackson’s ownership of slaves was looked at more closely by historians and it was his fall from grace. He was a champion of White People only. He was an unapologetic slave owner.

Trump’s other statement about why couldn’t the Civil War be worked out in advance is uninformed to be polite. It can be summed up simply: the South had zero intentions to halt owning fellow human beings as chattel. If Trump was not so ignorant of History, he would know they tried to work it out. There is no compromise when it comes to one human being having ownership of another.

That wasn’t his only rank ignorant remark of the day. He said he would like to meet with Kim Jong-Un. I had to read that four times for it to sink in. The President of the USA wants to give a Communist Dictator legitimacy with a meeting? This is not the GOP of which I was proud to be a member. He has also had praise for Erdogan, Duterte, as well as Putin. What is up with his love of tyrants and those who hate freedom?

How would you like to be Sean Spicer and have to go out and try to put a face on yet another example of Donald Trump’s rank ignorance broadcast to the world? I know what that job pays, and in Sean Spicer’s case, it is not nearly enough. Presidential spokesmen usually leave office and walk into a high paying job.

I’m not so sure that will happen with Sean. I’m not sure anyone is going to want to remember Trump fondly. Having served his Administration might be something one might want to omit from their resume. I know the media won’t miss him. Sean seems to be a bit too bright for Fox News, so I'm not sure what his plans are after leaving the White House and rehab.

That’s fine, the ignorant vote too as we saw in the past election, and they have a right to be heard. However, they are easily led by people who are nefarious. Just spew a little hate around and they follow like sheep.

The GOP has always said they recognized the crazies, but they could control them. Not any longer. They’re now in charge. The Barbarians are at the gate, and in the White House. It is dangerous for Freedom.