Comey Was Fired As The Russian Investigation Was Intensifying 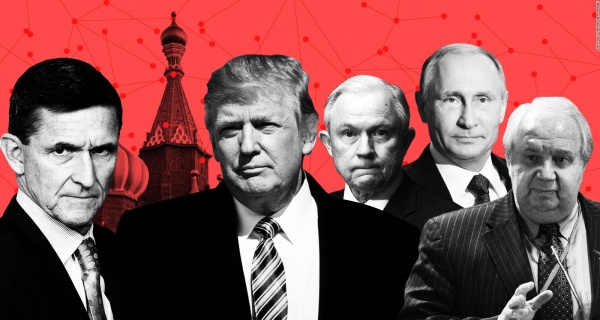 In the weeks before President Donald Trump fired FBI Director James Comey, a federal investigation into potential collusion between Trump associates and the Russian government was heating up, as Mr. Comey became increasingly occupied with the probe.

Mr. Comey started receiving daily instead of weekly updates on the investigation, beginning at least three weeks ago, according to people with knowledge of the matter and the progress of the Federal Bureau of Investigation probe. Mr. Comey was concerned by information showing potential evidence of collusion, according to these people.

White House officials said Wednesday that Mr. Trump had for months been contemplating the possibility of removing Mr. Comey, and that the dismissal this week wasn’t connected to the Russian probe.

Meanwhile, a congressional investigation into Russian meddling picked up steam as the Senate Intelligence Committee issued a subpoena Wednesday for the president’s former national security adviser, Mike Flynn, to produce documents relevant to the investigation. And a federal grand jury in Northern Virginia has issued subpoenas for records tied to Mr. Flynn, according to a person familiar with the matter.

FBI and Senate investigations into Mr. Flynn, which had been looking into the nature of his contacts with Russia before he joined the White House, expanded in recent weeks to include an examination of Mr. Flynn’s tenure as Mr. Trump’s chief security adviser, people familiar with the probe said.

Mr. Flynn was forced to resign as national security adviser for misleading Vice President Mike Pence about his contacts with Russian officials.

The Senate Intelligence Committee also has asked a Treasury Department office that investigates financial crimes for information related to Trump associates or people related to his campaign, said Sen. Mark Warner (D., Va.), the vice chairman of the committee.

Investigators are interested in companies that have done business with Mr. Trump or have connections with him, said people familiar with the matter. That could include businesses associated with members of Mr. Trump’s family, such as Jared Kushner, the president’s son-in-law turned aide who was formerly the CEO of his family’s real-estate business, Kushner Cos., one person said.

With his concerns mounting, Mr. Comey last week sought more resources to support the bureau’s investigation, which began last July. He requested additional personnel from Rod Rosenstein, who had been recently installed as the deputy attorney general, overseeing the FBI, people familiar with the discussions said.

Justice Department spokeswoman Sarah Isgur Flores said Mr. Comey and Mr. Rosenstein had their last meeting on May 1, with each man accompanied by a staff member. There was no discussion of resources or funds related to the Russia investigation at that meeting, Ms. Flores said.

On Monday, Mr. Comey briefed lawmakers on his request to boost the investigation, people familiar with the discussions said. The lawmakers, who have been running their own probe of alleged meddling in the U.S. election by Russia, and possible Trump campaign links with it, asked Mr. Comey if he could accelerate the FBI investigation, said a person with knowledge of the conversations.

Mr. Comey had been providing updates to top members of the Senate Intelligence Committee, which has taken the lead on Capitol Hill in the Russia probe, the person with knowledge of the conversations said.

On Tuesday, Mr. Trump informed Mr. Comey in writing that he was removing him as the head of the nation’s top law enforcement agency.

Mr. Comey’s dismissal prompted concerns among Democrats and Republicans that Mr. Trump’s White House was interfering with the FBI probe.

“That’s a big investigation the FBI is doing, and they are well into it,” said Sen. Dianne Feinstein of California, the top-ranking Democrat on the Senate Judiciary Committee. “As you know now, subpoenas are being requested.”

Sen. Richard Burr (R., N.C.), chairman of the Senate Intelligence Committee, said Tuesday he was “troubled by the timing and reasoning of Director Comey’s termination.”

Mr. Trump was asked during an Oval Office appearance Wednesday why he fired Mr. Comey. “Because he wasn’t doing a good job,” he said.

Senate Intelligence Committee investigators have grown alarmed as they reviewed intelligence reports, according to people familiar with the investigation.

To date, the inquiry has produced no “smoking gun,” these people said, but some investigators are persuaded that the evidence will show more than just casual contacts. One area of particular interest for the committee is Mr. Trump’s business dealings. The Senate Intelligence Committee has asked for information from the Financial Crimes Enforcement Network, or FinCEN, a division of the Treasury Department.

The goal of the financial inquiry is to understand the nature of any financial ties Mr. Trump may have to foreign interests, including Russia, and to determine to what extent, if at all, Mr. Trump or his associates have investments that may be tied to the Russian government, people with knowledge of the inquiry said.

There currently are 11 congressional staff working on the Senate probe, a number that some lawmakers have said publicly isn’t enough to handle the voluminous intelligence reporting and leads that have been generated by the Central Intelligence Agency and the National Security Agency.

Those reports comprised the bulk of information used to craft a public report earlier this year blaming the Russian government for hacks against the Democratic National Committee, Hillary Clinton’s campaign manager, and other political organizations. Russia has denied involvement in the hacking.

The committee’s review, which could take from 18 to 24 months to complete, is focused on several tranches of information, according to people with knowledge of the investigation.

Investigators and committee members have examined intelligence reports, including those from the NSA and the CIA, and committee staff have interviewed the analysts who helped craft the public document attributing the campaign-season hacking to Russia.