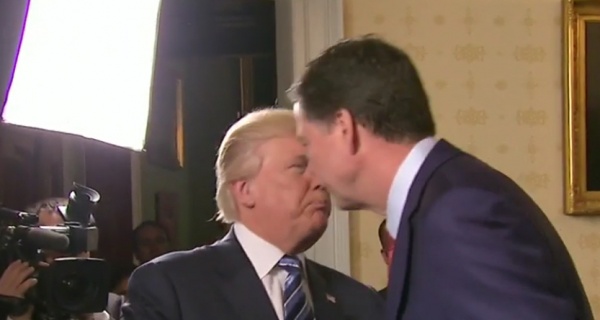 President Trump has fired the director of the F.B.I., James B. Comey, over his handling of the investigation into Hillary Clinton’s emails, the White House said Tuesday.

Mr. Comey was supervising an investigation into whether the Trump campaign colluded with Russia to steer the outcome of the 2016 presidential campaign. His firing is a stunning development in Mr. Trump’s nascent presidency.

Mr. Trump cited Mr. Comey’s investigation of Mrs. Clinton’s emails to justify the dismissal, even though the president was widely seen to have benefited from that inquiry.

Mr. Comey learned that he had been fired while he was addressing a group of F.B.I. employees in Los Angeles. While Mr. Comey spoke, television screens in the background began flashing the news. Shortly after, a letter was delivered to F.B.I. Headquarters in Washington.

The abrupt firing raised questions over whether Mr. Trump was trying to influence the Russia investigation. But he said he was following recommendations from the Justice Department, which criticized how Mr. Comey concluded the investigation into Mrs. Clinton.

“While I greatly appreciate you informing me, on three separate occasions, that I am not under investigation, I nevertheless concur with the judgment of the Department of Justice that you are not able to effectively lead the bureau,” Mr. Trump said in a letter to Mr. Comey dated Tuesday.

Mr. Comey broke with longstanding tradition and policies by publicly discussing the Clinton case last July and chastising her “careless” handling of classified information. Then, in the campaign’s final days, Mr. Comey announced that the F.B.I. was reopening the investigation, a move that earned him widespread criticism.

Yet many of the facts cited as evidence for Mr. Comey’s dismissal were well known when Mr. Trump kept him on the job. Mr. Comey was three years in to a 10-year term. And both Mr. Trump and his attorney general, Jeff Sessions, had praised Mr. Comey back then by calling his public announcement “gutsy.” On Tuesday, that action was at the heart of Mr. Comey’s firing.

“It is essential that we find new leadership for the F.B.I. that restores public trust and confidence in its vital law enforcement mission,” Mr. Trump wrote.

Officials at the F.B.I. said they learned through news reports of Mr. Comey’s dismissal, which Mr. Trump described as effective immediately. The president has the authority to fire the F.B.I. director for any reason.

The firing puts Democrats in a difficult position. Many had hoped that Mrs. Clinton would fire Mr. Comey soon after taking office, and blamed him as costing her the election. But under Mr. Trump, the outspoken and independent-minded Mr. Comey was seen as an important check on the new administration.

“Any attempt to stop or undermine this F.B.I. investigation would raise grave constitutional issues,” said Senator Richard J. Durbin, Democrat of Illinois. “We await clarification by the White House as soon as possible as to whether this investigation will continue and whether it will have a credible lead so that we know that it’ll have a just outcome.”

Senator Roy Blunt, Republican of Missouri, praised Mr. Comey’s service but said new leadership at the F.B.I. “will restore confidence in the organization.”

“Many, including myself, have questioned his actions more than once over the last year,” Mr. Blunt, who also sits on the Senate Intelligence Committee, said in a statement.

Mr. Trump’s decision to fire Mr. Comey marks the second time since taking office that the president has fired a top law enforcement official. In early February, Mr. Trump fired Sally Q. Yates, who had worked in the Obama administration but was serving as acting attorney general.

But the president’s firing of Mr. Comey was far more consequential. Ms. Yates was a holdover, and would only have served in the Trump administration for a matter of days or weeks. By contrast, Mr. Comey was in the midst of his term as director of the bureau.

“I cannot defend the director’s handling of the conclusion of the investigation of Secretary Clinton’s emails,” Mr. Rosenstein wrote in another letter that was released by the White House, “and I do not understand his refusal to accept the nearly universal judgment that he was mistaken.”

A longtime prosecutor who served as the deputy attorney general during the George W. Bush administration, Mr. Comey came into office in 2013 with widespread bipartisan support. He has essentially been in a public feud with Mr. Trump since long before the presidential election.

In a Twitter message this week, Mr. Trump accused Mr. Comey of being “the best thing that ever happened to Hillary Clinton,” accusing him of giving her “a free pass for many bad deeds.”

Senator Ron Wyden, Democrat of Oregon and a member of the Senate Intelligence Committee, said in a post on Twitter that Mr. Comey “should be immediately called to testify in an open hearing about the status of Russia/Trump investigation at the time he was fired.”

Sean Spicer, the White House press secretary, offered a veiled hint of the bombshell earlier in the day on Tuesday, though no reporters picked up on it.

During his daily briefing, Mr. Spicer was asked — as he frequently is — whether Mr. Comey still has the confidence of the president. Instead of saying yes, Mr. Spicer danced around the question.

“I have no reason to believe — I haven’t asked him,” Mr. Spicer said. “I have not asked the president since the last time we spoke about this.”

A reporter noted that Mr. Spicer had previously indicated that the president did have confidence in Mr. Comey, but asked whether recent revelations about Mr. Comey’s misstatement during testimony on Capitol Hill would change that.

“In light of what you’re telling me, I don’t want to start speaking on behalf of the president without speaking to him first,” Mr. Spicer said.

The president’s decision to fire Mr. Comey appeared to be the culmination of the bad will between the men that intensified in early March, when the president posted Twitter messages accusing former President Barack Obama of wiretapping his office.

The next morning, word spread quickly that Mr. Comey wanted the Justice Department to issue a statement saying that he had no evidence to support the president’s accusation. The department did not issue such a statement.

For weeks after, Mr. Trump insisted that his accusation was correct. In dramatic testimony later in March, Mr. Comey said that he had no information to back up the president’s allegations.

That set up a remarkable dynamic — an F.B.I. director directly contradicting a sitting president at the same time that the bureau was pursuing a possible criminal investigation into the president’s aides.