A Pardon Of A Life Sentence, Is Welcomed News To The Offender And Sentencing Judge 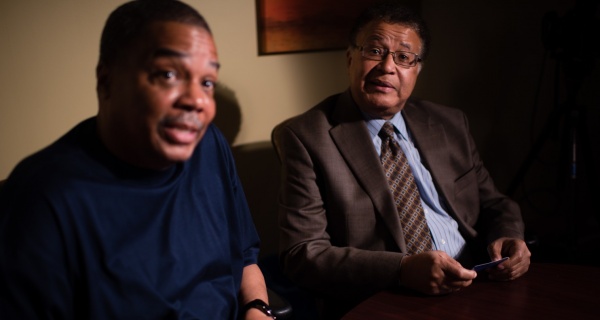 When Evans Ray Jr. stood in a federal courtroom in 2007 after arranging a drug sale, a judge explained, at length, that he didn’t want to hand down the mandatory life sentence required by law.

“It is my desire not to sentence you to life,” Judge Alexander Williams Jr. said in his Greenbelt, Md., courtroom, according to transcripts. “I believe that the circumstances justify a sentence shorter than life. I further believe that there is some disproportionality between what you’ve done and the sentence of life.”

Ray, 47, a barber with a wife, four children and two prior drug convictions, initially refused to arrange the sale. He was a middleman pushed into the transaction by a friend who turned out to be a government informant, and didn’t profit from the deal. The other defendants involved in the sale received lighter sentences. Williams tried to sentence Ray to a shorter term of 27 years, but prosecutors appealed.

The conviction was what is commonly called a “third strike,” which can trigger a mandatory minimum sentence. In Ray’s case, a life sentence it would be.

After his sentencing, Ray thanked the man who ensured he would die behind bars.

“I have to own up to my own responsibility. The law says life. I’m not in agreement with it, not at all, and I know you weren’t,” Ray said, according to transcripts. “But I just want to thank you and the courts for at least trying.”

Ray now considers himself “blessed,” he said — he was granted clemency in 2016 by President Barack Obama. After 12 years, he is out, and he and the judge who gave him life are joining forces to condemn mandatory-minimum sentences.

“It had to be said,” Williams, now retired, said of his comments from the bench during a recent meeting with Ray at his College Park office. “It didn’t sit right in my stomach.”

Ray, meanwhile, is adjusting to a life he thought he would never return to. Now 57, he is living with his parents in Prince George’s County, getting to know his children, holding down a job and speaking out against the law that sought to keep him behind bars for life.

Obama’s letter arrives in the mail:

Mandatory minimum sentences have long troubled drug-reform advocates. First instituted by Congress during the war on drugs in the 1980s, they prevent judges from considering other factors, such as past behavior, when handing out prison time.

Some judges don’t like them, either. Kevin Sharp, a former federal court judge in Tennessee who recently stepped down after six years, said he “didn’t sleep for several nights” in 2014 when he sentenced a minor player in a drug deal to life.

“I dragged out the sentencing so that I wouldn’t have to say these words and sentence him,” said Sharp, now a civil rights attorney in private practice.

In Maryland, Williams said he presided over about 1,000 criminal cases before stepping down, and “certainly a couple hundred” involved mandatory minimums.

“None of the judges like having their hands tied,” he said.

The Maryland U.S. Attorney’s Office, which prosecuted Ray, declined to comment on the case. But Del Wright Jr., a prosecutor in Ray’s case who is now a law professor at Valparaiso University in Indiana, said he didn’t think Ray’s sentence was fair — even though Wright worked for the office that asked for it.

After Ray declined a plea agreement and was convicted at trial, Wright said, prosecutors had no choice but to ask for a mandatory life sentence. The threat of a mandatory minimum is what can induce people to accept plea bargains to lesser charges, he said.

“I use that [as an example] in my classes sometimes,” he said of the case. “It’s our role. It’s not something you necessarily want to do.”

[I sentenced criminals to hundreds more years than I wanted to. I had no choice.]

Ray was thrown into the federal prison system with a hefty sentence, serving hard time. Although he had never fired a gun, he said, he was sent to Big Sandy, a high-security penitentiary in Kentucky also known as “Killer Mountain.” Some killers and rapists were serving shorter sentences than him, and peace between races was kept by the constant threat of violence.

Ray kept out of trouble, working toward lower-security institutions, and applied for clemency in 2014. Obama made it clear that he was no friend of mandatory minimums, eventually granting clemency to more than 1,700 people. Ray was the type of candidate the Obama administration had in mind: He had limited criminal history and arguably was pulled into a conspiracy.

Sapna Mirchandani, a Maryland federal public defender, said she learned of Ray’s case during a review of hundreds of mandatory minimum sentences while searching for possible clemency applicants.

Mirchandani helped put together Ray’s clemency petition. Among the letters submitted on his behalf were some from prison officials — and one from Williams, the judge in Ray’s case.

“As I stated at the time of sentencing, and as I believe even more strongly today, imposing a life sentence on Mr. Ray for the single sale of 60 grams of cocaine base . . . amounted to cruel and unusual punishment,” the judge wrote in April 2016.

Ray was granted clemency in August. He was so nervous about reading the letter when it arrived that he asked a fellow prisoner to read it for him.

“I am granting your application because you have demonstrated the potential to turn your life around,” Obama wrote. “Now it is up to you to make the most of this opportunity.”

Since he stepped out of prison, Ray says he has done just that.

“It’s like a long black tunnel, but you can’t let that beacon of light go dark,” he said.

Forecast for a better future:

Some prosecutors disagree. Larry Leiser, president of the National Association of Assistant U.S. Attorneys, a professional association for prosecutors, declined to comment, but referred to the organization’s 2015 white paper on mandatory minimums that concluded they help reduce violent crime and persuade defendants to cooperate with prosecutors.

“Behind the sentimental appeal of the circumstances of some defendants serving long mandatory sentences is the ‘rest of the story,’ ” it read. “In nearly every instance, the defendant has been convicted multiple times before and could have avoided a longer sentence . . . Instead they elected not to assist law enforcement and instead protected fellow coconspirators.”

Ray and hundreds of other offenders granted clemency by Obama, meanwhile, are struggling to adapt to a reality that many thought they would never see: shaking off a life sentence and learning to survive outside prison — in some cases at an age when others may contemplate retirement.

David Carroll, 64, was convicted of distribution of crack cocaine in 1995 in Virginia. He served 22 years before Obama commuted his sentence, and was released last fall.

“Twenty-two years takes a toll, whether you’re inside or out,” he said.

His first stop was Hope Village, the maligned D.C. halfway house with a history of security issues and problems connecting residents with jobs.

“Some guys would rather stay in jail than go to Hope Village,” Carroll said.

In an interview, Hope Village Director Jeff Varone referred to Washington Post stories about problems at the halfway house, saying he shared Trump’s opinion that The Post offered “fake news.”

“No matter what we say isn’t going to be good enough,” Varone said. “We do the best possible job with these guys. They think we’re miracle workers. I think we do a really outstanding job for our community.”

Carroll is sleeping on his niece’s couch in Falls Church, with limited job prospects. He wants to start a hauling business with his Ford truck, but said he’s had trouble getting a driver’s license because of complications with a 32-year-old outstanding traffic ticket.

Unlike less fortunate former prisoners, he is surrounded by friends and family to support him as his new life begins, but wants to get back to work.

“I hope to be halfway stable so I can give a better forecast for next year, five years,” Carroll said. “I have to make money.”

Ray is helping to care for his mother, who recently had a mastectomy, and his stepfather, who lost both his legs to diabetes. He makes a little more than the District’s minimum wage at the Toni Thomas Community Empowerment Training Academy, a jobs program in Southeast Washington. He’s also able to help his children for the first time, “taking some of the slack off their moms,” he said.

“I didn’t have any memories,” said Thea Ray, his 14-year-old daughter who was 2 years old when her father was locked up. “Just pictures.

Among sentencing reform advocates, Ray’s voice is valued — but interviews and speaking engagements don’t pay, and he sometimes misses paid work for them.

“I just can’t forget where I came from,” he said. “The day you stop fighting for your life is the day you give up.”

Among those cheering for him is the judge who sent him away.

“It’s a happy ending,” Williams said, “and I’m just glad I could play a small part.”