Inside Trump's Fascination With Dictators 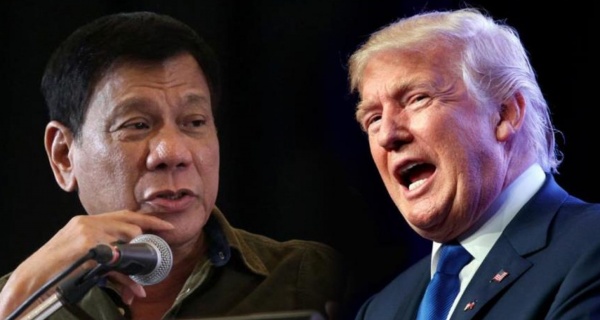 What is it about dictators, authoritarian presidents-for-life, and outright ruling thugs that appeals to Donald J. Trump?

In his wildly contradictory roller-coaster-ride of a foreign policy, in which Trump swings erratically from this position to that one, there's one true constant: he's attracted to people in power who rule by decree. At home, he's learning fast that our pesky, democracy-riddled republican system makes it a lot harder to govern than, say, to build a golf course. Perhaps that's why he's found an affinity for a growing list of bosses overseas unfettered by a Congress that has, you know, "bureaucratic … rules" or a judiciary system filled with "so-called" judges.

Consider the list of those who Trump has variously praised, expressed his admiration for, called to congratulate or invited to the White House: President Rodrigo Duterte of the Philippines, President Recep Tayyip Erdogan of Turkey, and President Abdel-Fattah al-Sisi of Egypt, just for starters. Then, there's his thinly disguised support for Marine Le Pen, the leader of the far-right National Front in France, who could be elected as France's next president this Sunday. Of course, there's Trump's much-noted bromance with Russia's Vladimir Putin. And this week, noting with some sympathy that North Korea's Kim Jung Un took power at a "very young age," Trump called him "a pretty smart cookie" who he would be "honored" to meet.

Start with Duterte. By all accounts, the Philippines leader is a monster. In a recent profile of Duterte, the New York Times led its story this way: "President Rodrigo Duterte relishes the image of killer-savior. He boasts of killing criminals with his own hand. On occasion, he calls for mass murder.

Speaking of the drug addicts he says are destroying the Philippines, he said, 'I would be happy to slaughter them.'" Thousands, of Filipinos have been massacred in a wave of extrajudicial killings, part of a brutal "war on drugs" orchestrated by Duterte's government. During his presidential campaign last year, referring to the gang-rape of an Australian missionary whose throat was slashed by her assailants, Duterte, the former mayor of Davao City, commented: "I was angry because she was raped, that was one thing. But she was so beautiful, I think the mayor should have been first. What a waste!" There's more, but you get the idea.

Yet last December, in a phone call, Trump praised Duterte for conducting his drug war "the right way." And on April 29, in another call, Trump stunned his own aides by extending an invitation to Duterte to visit the White House. Perhaps Trump's fondness for Duterte has something to do with the fact of the Trump Organization's Trump Tower at Century City outside Manila – whose advertising posters formerly featured huge photos of Ivanka Trump – or that the newly appointed Philippines trade representative to the United States is Jose E.B. Antonio, Trump's business partner in the Manila property.

Meanwhile, in a couple of weeks Trump will host Turkey's Erdogan at the White House. Erdogan, a conservative Muslim fundamentalist, has led Turkey since becoming prime minister in 2003 and president in 2014, and he's moved that country increasingly toward one-man rule. Since an abortive coup d'état was suppressed last summer, Erdogan has carried out a massive, unending purge of up to 140,000 people, silencing the media and seizing newspapers, and shutting down 1,500 civil society groups. After Erdogan directed a stage-managed referendum last month giving him vast new power – during which his campaign compared opponents to supporters of ISIS – Trump called Erdogan on April 17 to congratulate him. Added the Times: "Mr. Trump and Mr. Erdogan are viewed as ideological bedfellows."

On Egypt, Trump has found common cause with President Sisi, too. A no-nonsense military dictator, Sisi led a coup d'etat by Egypt's armed forces in 2014, toppling the elected Egyptian leader, Mohammad Morsi. Since then, Sisi has ruled by emergency decree, suspending civil liberties, sentencing hundreds of political prisoners to death, and accusing moderate opponents in the Muslim Brotherhood of being "terrorists." Despite all that, in early April Trump shook hands with Sisi at the White House and, ignoring human rights concerns, declared: "I just want to let everybody know that we are very much behind President Sisi; he has done a fantastic job in a very difficult situation." As the Times reported: "In that one moment, Mr. Trump underscored a fundamental shift in American foreign policy since he took office. While his predecessors considered authoritarians like Mr. Sisi to be distasteful and at times shied away from them, Mr. Trump signaled that he sees international relations through a transactional lens."

The point, of course, isn't that the president of the United States should refrain from interacting with foreign leaders, no matter how distasteful, in the normal conduct of foreign policy. But Trump not only enthusiastically supports, defends, and praises such leaders but he refrains entirely from using his bully pulpit – and the considerable power of U.S. foreign aid, arms sales, and political support – to attempt to underscore the importance that Washington places, or ought to place, on human rights. To be sure, human rights is not the only focus of American foreign policy, and in some cases – such as China – the United States has little or no leverage over the policies of governments overseas. Still, Trump's near-total abandonment of human rights, and his refusal to challenge leaders such as Duterte, Erdogan, or Sisi on their overt abuses, undermines whatever is left of America's moral standing around the world. "We are watching in real time as the American human rights bully pulpit disintegrates into ash," said Senator Chris Murphy, the Connecticut Democrat.

Though ignoring human rights issues has often marked U.S. policy abroad, to a greater or lesser degree, Trump has taken it to a new level, according to Human Rights Watch. A statement by Sarah Margon, the Washington director for HRW, put it this way: "He's been virtually silent on human rights abuses when meeting or speaking with some of the world's worst offenders – including leaders from Egypt, China, Saudi Arabia, and Turkey. Previous administrations have sometimes soft-pedaled their criticism of these governments, but none displayed the kind of determined indifference to human rights that Trump has channeled so far."

Trump, too, has blithely supported Saudi Arabia's brutal war in Yemen, and he's sought closer ties to dictators in the Persian Gulf states of Bahrain and the United Arab Emirates. (The UAE, one of the few Muslim majority countries to endorse Trump's seven-nation Muslim ban when it was announced in January, also hosts the prestigious Trump International Golf Club in Dubai.)

In Europe, furthermore, Trump – and especially the hardcore nationalist faction centered on former Breitbart boss Steve Bannon – seems closely wed to far-right nationalist groups in the U.K. and on the Continent, including the National Front's Le Pen. On the eve of the April 23 presidential election, out of which Le Pen emerged as one of two candidate facing each other in the May 7 runoff, Trump virtually endorsed Le Pen. A recent terrorist incident in France, said Trump, would have "a big effect on the presidential election," favoring Le Pen who, Trump added, "is the strongest on borders, and she's the strongest on what's going on in France." As CNN pointed out, both Trump and Putin are attracted to Le Pen's militant anti-terrorist stand. In late March, in the midst of her election campaign, Le Pen paid a high profile visit to Moscow, where she held an unusual, and controversial, summit with Putin.

But Trump hasn't mentioned the sordid past of Le Pen, the National Front, and Le Pen's notorious father and party founder, Jean-Marie Le Pen. But the party is rooted in an odiously anti-Semitic past, and although Le Pen has sought to downplay the Front's record, she has also grafted onto it another form of racialism: Islamophobia. She's running a campaign, as Trump notes, "[strong] on borders" and replete with denunciations of Islam and Muslim immigrants.

None of this ought to surprise Americans who've followed Trump's 2016 campaign, his bombastic tweets, and his disdain for the trappings of democracy. In fact, his penchant for off-the-cuff executive orders and rabble-rousing statements – such as his declaration, this week, that the United States government "needs a good shutdown" – are precisely matched by his romance with those abroad who, apparently to Trump's jealous chagrin, don't have to deal with pesky oppositionists.