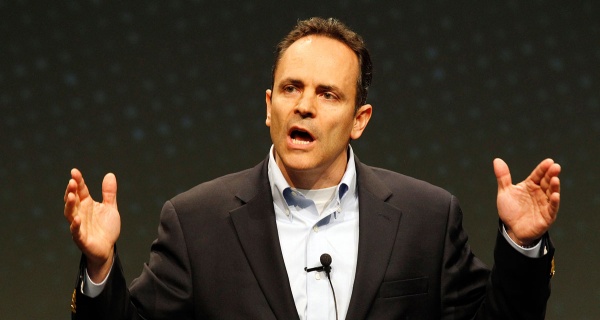 Kentucky, along with Arkansas, has been the big success story of Obamacare. The state's iteration of the law, KYnect, was implemented by former Democratic Gov. Steve Beshear and dramatically increased insurance among the state's residents, particularly under Medicaid expansion. The state's new Republican governor, however, has been trying to come with a way to destroy those gains and the program without out and out repealing it. So he has a new plan—make Medicaid so invasive and punishing that people won't want to be in the program.

Bevincare would "enhance" Medicaid benefits by taking several of them away. You will lose the security of knowing your eye doctor and dentist will see you when you need them, and gain the exciting new opportunity to earn chits toward the cost of those same services.

But to accrue those chits, you must live by Bevin's rules. MyRewards points accumulate based on the enrollee's participation in job training, health screening, smoking cessation, volunteer, and educational programs. […]

Bevin's behavioral incentives effectively convert his definition of good character into a state-enforced moral code which everyone who can't afford health insurance must follow—and whose compliance the state must monitor. […]

The biggest change is Bevin's proposal to charge premiums for Medicaid and impose an annual $1,000 deductible before the program covers beneficiaries' health care costs. Those are big price hikes for people who can't afford them. Similar policies have driven down insurance rates and harmed public health outcomes in other states already.

There are other requirements as well, like proving you are working or in job training or volunteering, despite the fact that most Medicaid recipients in the expanded program are indeed working already. But it gets even meaner—you can be "fined" if you get too much care. One too many visits to the emergency room, and you have to start paying.

Bevins is, of course, one of those "get government out of our lives" kind of Republicans. The kind who think it's fine to dictate and monitor people's daily lives, as long as those people are poor.