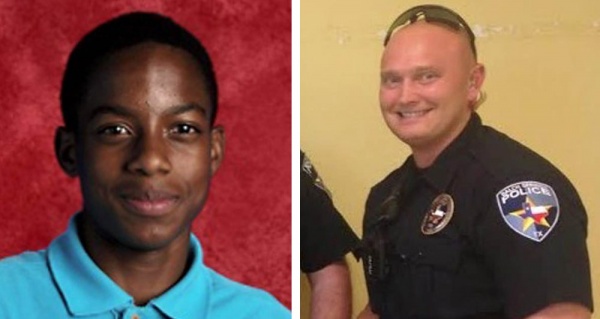 Officials identified the officer as Roy Oliver and said he had been with the department since July 2011.

“After reviewing the findings I have made the decision to terminate Roy Oliver’s employment with the Balch Springs Police Department,” chief Jonathan Haber told reporters Tuesday evening. “My department will continue to be responsive, transparent and accountable.”

The shooting occurred around 11 p.m. Saturday evening, after officers got a call concerning intoxicated teenagers and arrived to find a house party. Department spokesman Pedro Gonzalez said that while officers were inside the house, they heard gunshots outside.

Officers left the house and saw a vehicle backing into the street, Gonzalez said. Officers yelled for the driver to stop, but the vehicle began pulling forward to drive away. Police opened fire and a single bullet struck and killed Edwards, who was riding in the passenger seat.

“It has been determined that Roy Oliver, who was the second officer on the scene, violated several departmental policies,” Gonzalez said. He did not specify which policies had been violated.

Oliver has the right to appeal his termination. His attorney, Cindy Stormer, called for patience in a statement provided to the Dallas Morning News.