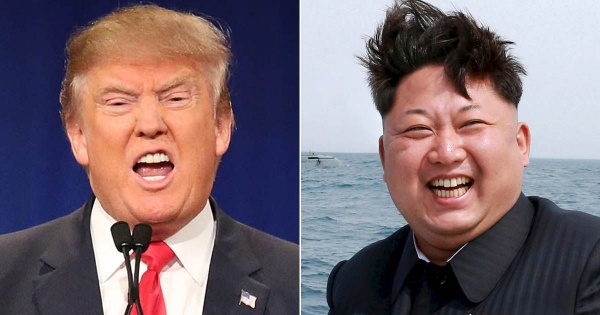 President Donald Trump said he would meet with North Korean leader Kim Jong Un amid heightened tensions over his country’s nuclear weapons program if the circumstances were right.

“If it would be appropriate for me to meet with him, I would absolutely, I would be honored to do it,” Trump said Monday in an Oval Office interview with Bloomberg News. “If it’s under the, again, under the right circumstances. But I would do that.”

The U.S. has no diplomatic relations with North Korea, and as recently as last week, Secretary of State Rex Tillerson said at the United Nations that the U.S. would negotiate with Kim’s regime only if it made credible steps toward giving up its nuclear weapons and ballistic missiles.

“Most political people would never say that,” Trump said of his willingness to meet with the reclusive Kim, “but I’m telling you under the right circumstances I would meet with him. We have breaking news.”

Asked later about Trump’s comments, White House press secretary Sean Spicer told reporters that “clearly conditions are not there right now” for a meeting. He said “we’ve got to see their provocative behavior ratcheted down.”

North Korea has become the most urgent national security threat and foreign policy issue facing Trump as his first 100 days in office passed. Kim’s regime has continued development of its nuclear and intercontinental ballistic missile program in defiance of international condemnation and sanctions. Military analysts have said North Korea is on course to develop a nuclear-tipped ballistic missile that could reach the U.S. mainland as soon as 2020, during Trump’s term in office.

Kim has never met with a foreign leader since taking charge after his father’s death in 2011 and hasn’t left his isolated country.

Over more than two decades, six-nation talks, direct bilateral negotiations, food aid and UN sanctions have all failed to deter the Kim dynasty’s quest for a nuclear arsenal. That has left the Trump administration relying increasingly on China, North Korea’s neighbor and top trading partner, to exert pressure on the regime.

While Trump didn’t spell out what conditions would have to be met for him to sit down with Kim, Evans Revere, a former U.S. diplomat in South Korea, said “it’s almost impossible to imagine North Korea meeting the conditions that would allow such a meeting to occur.”

“North Korea withdrew from the Nuclear Non-Proliferation Treaty when it was caught cheating, violated every one of the denuclearization commitments it made, and now threatens the United States and its allies with nuclear weapons,” Revere, a senior adviser at the Albright Stonebridge Group in Washington, said in an email. “That’s hardly the basis for a presidential meeting with Kim Jong Un.”

Tensions have escalated since Trump vowed in January that he wouldn’t let North Korea develop a nuclear weapon capable of reaching the U.S., and North Korea has labeled American military moves in the region as acts of “intimidation and blackmail.” North Korea has continued to test missiles this year after carrying out its fourth and fifth nuclear tests in a decade last year.

While dispatching an aircraft carrier group and a submarine to the region, the Trump administration has emphasized the use of economic sanctions and diplomacy to persuade North Korea to curtail its nuclear program. Trump has said he’s encouraged by Chinese President Xi Jinping’s efforts to defuse the situation. Trump and Xi met last month at the U.S. president’s private club in Florida and have talked several times since.

Then-Secretary of State Madeleine Albright was the last top U.S. official to meet with a North Korean leader. She discussed the country’s nuclear program with Kim’s father, Kim Jong Il, in 2000. At the time, she was the most senior official to visit the Stalinist state in the 50 years since the Korean War.