Trump Says Andrew Jackson Was Angry About Civil War. Only Problem Is: He Was Dead 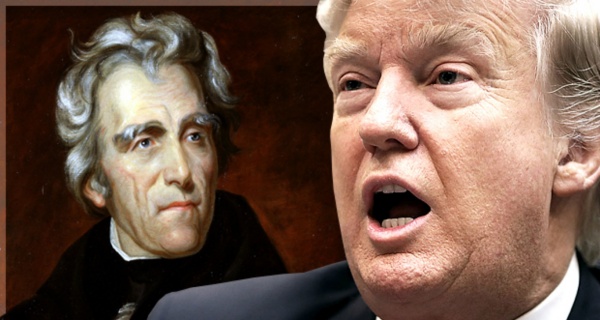 President Donald Trump made puzzling claims about Andrew Jackson and the Civil War in an interview, suggesting he was uncertain about the origin of the conflict while claiming that Jackson was upset about a war that started 16 years after his death.

Trump, who has at times shown a shaky grasp of U.S. history, said he wonders why issues "could not have been worked out" in order to prevent the secession of 11 Southern states and a war that lasted four years and killed more than 600,000 soldiers.

"People don't realize, you know, the Civil War, if you think about it, why?" Trump said in an interview with The Washington Examiner, according to a transcript released Monday. "People don't ask that question, but why was there the Civil War? Why could that one not have been worked out?"

Trump ruminated after lauding Jackson, the populist president whom he and his staff have cited as a role model. He suggested that if Jackson had been president "a little later, you wouldn't have had the Civil War."

"He was really angry that he saw what was happening with regard to the Civil War. He said, 'There's no reason for this,'" Trump continued.

Jackson was a slave-holding plantation owner. Some historians do credit him with preserving the union when South Carolina threatened to secede in the 1830s over an individual state's ability to void federal tariffs. That controversy, though, was not about slavery, and the eventual compromise that preserved states' rights is viewed as a milestone on the way to the Civil War.

The Civil War was decades in the making, stemming from disputes between the North and South about slavery and whether the union or states themselves had more power. The question over the expansion of slavery into new western territories simmered for decades and Southern leaders threatened secession if anti-slavery candidate Abraham Lincoln was elected in 1860.

After Lincoln won without carrying a single Southern state, Southern leaders believed their rights were imperiled and seceded, forming the Confederate States of America. War erupted soon afterward as the North fought to keep the nation together.

The White House did not immediately respond to a request for an explanation of Trump's reasoning.

Trump, during an African-American history month event, seemed to imply that the 19th century abolitionist Frederick Douglass was still alive. Trump said in February that Douglass "is an example of somebody who's done an amazing job and is getting recognized more and more, I notice."

While justifying the need for a southern border wall, Trump said last week that human trafficking is "a problem that's probably worse than any time in the history of this world," a claim that seemed to omit the African slave trade.