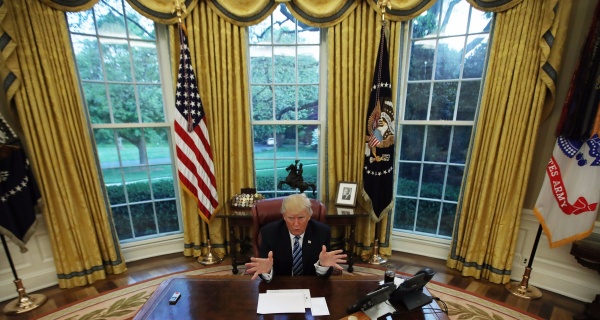 On his 100th day in office, a listless Donald Trump sat down with Reuters to talk about his accomplishments. As fate would have it, Trump had just been told that two servicemembers had been killed in an anti-ISIS raid in Afghanistan, his re-re-remade healthcare bill was dead on arrival, and his plans to build a wall were going up in flames. But he had other things on his mind. For Donald Trump, every day is November 8th, 2016.

To the three reporters, Trump passed out a printed picture of the United States, with counties he won in the election colored in red.

More than five months after his victory and two days shy of the 100-day mark of his presidency, the election is still on Trump’s mind. Midway through a discussion about Chinese President Xi Jinping, the president paused to hand out copies of what he said were the latest figures from the 2016 electoral map.

“Here, you can take that, that’s the final map of the numbers,” the Republican president said from his desk in the Oval Office, handing out maps of the United States with areas he won marked in red. “It’s pretty good, right? The red is obviously us.”

Later he posed for photos, insisting on holding up the map. (Note: Trump’s White House photographer, who formerly worked in the Bush White House, likes to take pictures of Trump from really far away. It’s unclear exactly why.)

Reporter Jeff Mason recounted the surreal moment the President of the United States interrupted questions on North Korea and China to brag about a map of the election he had won more than 5 months earlier. His expressions cycle from disbelief to pity to humor and back to disbelief.

CNN’s Chris Cuomo asked the reporters the obvious question: Is Trump really so insecure that he still feels he has to prove that he won the election? Mason said it could be a lot of factors (all troubling from a mental health standpoint):

“I think that’s a good question and it’s hard for me to answer that. I think he just wanted to relish in the fact that this map, uh, looks good for him and he said ‘the red is obviously us’ and the red are areas in the country that he won. So he’s just very proud of it. And whether that’s rooted in a sense that he still has to prove that he won or that he’s upset that the media got it wrong in terms of the predictions ahead of time it’s hard for me to say.”

Trump, a 70-year-old billionaire, craves the attention one might give a child for a project they made in art class. He may as well have asked the reporters to pin the map up on their refrigerator doors.

Making it even more clear that Trump is suddenly feeling very small, he later admitted that being president is really hard, and it’s not as fun as his old life. The fact that running the country wouldn’t be as easy as being a semi-retired billionaire and reality tv show host was something that apparently never occurred to Trump prior to being elected.

At least he’s got his map.