Let's Face It, The Media Played The Public And Helped Elect The Worst Candidate In American History 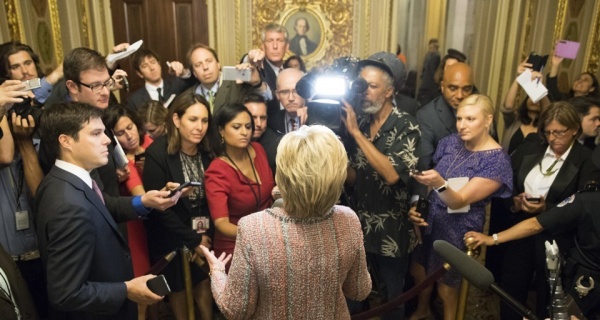 The media doesn’t talk about how Hillary Clinton really lost, because it implicates their judgment.

Nate Silver pointed out that Hillary Clinton got a 3 point drop in her polls after the Comey letter about her non-existent email scandal and then she lost Florida, Wisconsin, Pennsylvania, and Michigan by 1 point. The media has ignored this fact, he wrote, because it implicates their judgment.

“Clinton experienced a sharp, 3-point drop in her polls after the Comey letter came out. Then on 11/8, she lost FL, WI, PA & MI by <=1 point," Nate Silver wrote on Twitter. Adding, "It's a fairly open-and-shut case. But the media's election post-mortems have mostly ignored it because it implicates the media's judgement.

The media has responded fairly well, unexpectedly so, to Donald Trump’s assaults on freedom, and they are operating under a constant threat of attack for being the Kremlin dubbed Trump favorite “fake news” now, so it’s not that I want to pile on.

But it’s vital that we all examine how we got here, and unfortunately, part of that is the media’s willingness to carry water for fake email scandals regarding Hillary Clinton. I say fake because every Republican who has been in executive office has done the same thing and or worse – used a private server and in some cases destroying government property to make sure those emails could never be recovered. We didn’t hear about those scandals like we did Hillary Clinton’s decision to use a private server, which makes the “scandal” a ginned up, bizarre issue.

Romney did the same thing and worse as Governor, but it wasn’t an issue in 2012.

Perhaps this is why the media has been so willing to run with a Republican aide’s version of facts as a fact, or carry this email water for Republicans. Maybe they just wanted a story. Maybe they hated Hillary Clinton so much that they were blinded to the realities of the situation. There are a lot of possible reasons contributing to why this happened.

But happen it did, and the media must, as they stand up to accusations of fake news by Trump and his Kremlin friends, also do a fierce examination of what caused them to elevate the email scandal above so many of Donald Trump’s obvious and more troubling issues.

This isn’t to blame the media for Russia’s interference or even for greedily reporting what they knew were stolen emails that might very well be unreliable (given Kremlin’s habit of mixing in a few falsehoods into stolen/hacked material). That is for each news room to determine, and a case can be made that there is a duty to report because the information is out there.

But the ball was dropped here, and it caused this absolute assault on democracy and humanity. Hillary Clinton was damaged by the Comey letter and it cost her 3 points in an election she lost in three states by a combined 78,000 votes.

Yes, the media mattered in that outcome and yes, it bears – we all bear – responsibility for it. We could have, would have otherwise, had an experienced, competent leader in the White House.