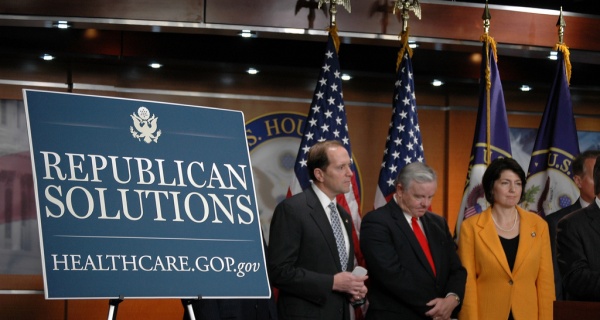 House Republicans appear to have included a provision that exempts Members of Congress and their staff from their latest health care plan.

The new Republican amendment, introduced Tuesday night, would allow states to waive out of Obamacare’s ban on pre-existing conditions. This means that insurers could once again, under certain circumstances, charge sick people higher premiums than healthy people.

Republican legislators liked this policy well enough to offer it in a new amendment. They do not, however, seem to like it enough to have it apply to themselves and their staff. A spokesperson for Rep. Tom MacArthur (R-N.J.) who authored this amendment confirmed this was the case: members of Congress and their staff would get the guarantee of keeping these Obamacare regulations. Health law expert Tim Jost flagged me to this particular issue.

A bit of background is helpful here. Obamacare requires all members of Congress and their staff to purchase coverage on the individual market, just like Obamacare enrollees. The politics of that plank were simple enough, meant to demonstrate that if the coverage in this law were good enough for Americans than it should be good enough for their representations in Washington.

That’s been happening for the past four years now. Fast-forward to this new amendment, which would allow states to waive out of key Obamacare protections like the ban on pre-existing conditions or the requirement to cover things like maternity care and mental health services.

If Congressional aides lived in a state that decided to waive these protections, the aides who were sick could be vulnerable to higher premiums than the aides that are healthy. Their benefits package could get skimpier as Obamacare’s essential health benefits requirement may no longer apply either.

This apparently does not sound appealing because the Republican amendment includes the members of Congress and their staff as a protected group who cannot be affected by this amendment.