Trump Says Wisconsin Borders Canada. Only Problem Is: It Doesn't 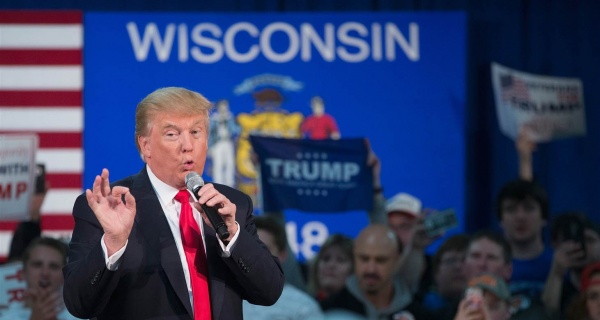 It can easily be said that Donald Trump doesn’t have a clue what he is doing. He hears things in clips and talking points, and then spews them out to the world, usually via Twitter, without thinking about the weight of his actions.

One of the things Trump has been hung up on lately is Canada taking control of their dairy. According to Business Insider:

“Last year, Canada implemented a policy that created a new class of milk prices for ultra-filtered milk, a liquid, high-protein concentrate sometimes used to make products such as cheese and yogurt. Canada lowered the prices for this milk class, so as to incentivize domestic ultra-filtered milk and better compete with the US-produced imports.”

How dare they, right? The United States should not only legislate in their own country regarding the market but also around the world. At least that’s what Trump seems to think.

So Trump, trying to puff his chest and seem like he’s a tough guy, tweets out:

“Canada has made business for our dairy farmers in Wisconsin and other border states very difficult. We will not stand for this. Watch!”

Here’s the thing about that statement, besides being inflammatory and going after one of our nearest and dearest allies, Wisconsin doesn’t fall on the Canadian border with the United States.

Not only is Trump going after Canada for a reason he really shouldn’t be, but he also apparently needs a map. Will someone please get on that?!