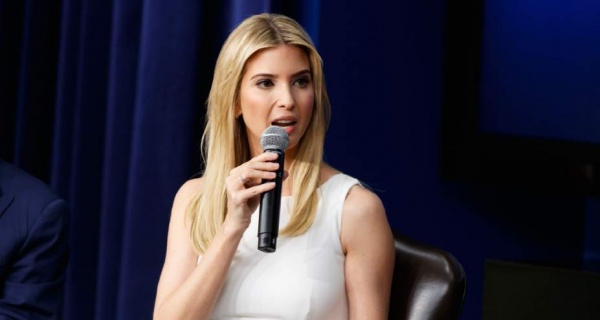 Ivanka Trump elicited groans and hisses on Tuesday from some members of the audience at a conference in Germany after she defended her father’s attitude and record on women, calling him a “tremendous champion” of families.

An entrepreneur and an adviser to the president, Ms. Trump, 35, was in Berlin to represent the United States at a meeting on female business leaders.

Speaking on a panel that included Angela Merkel, the chancellor of Germany, and Christine Lagarde, the managing director of the International Monetary Fund, Ms. Trump was asked about her role in the White House and President Trump’s previous comments about treating women disrespectfully.

Her father has been “a tremendous champion of supporting families and enabling them to thrive,” Ms. Trump said. That comment prompted some members of the audience to groan and hiss.

“You hear the reaction from the audience,” said the panel’s moderator, Miriam Meckel, editor in chief of WirtschaftsWoche. “I need to address one more point. Some attitudes toward women your father has displayed might leave one questioning whether he’s such an empowerer for women.”

Ms. Meckel’s seemed to be referring to a video publicized during the 2016 presidential election in which Mr. Trump was recorded on an open microphone disparaging women.

“I’ve certainly heard the criticism from the media, that’s been perpetuated,” Ms. Trump said, leading to laughter from some of the people attending the conference.

Ms. Trump added that the thousands of women who worked for her father’s businesses “are a testament to his belief and solid conviction in the potential of women and their ability to do the job as well as any man.”

Ms. Trump’s visit to Germany came at the invitation of Ms. Merkel, and it was her first international trip as a White House adviser. Ms. Trump and her husband, Jared Kushner, are considered among the president’s closest advisers. She attended the W20 Summit, a meeting focused on women’s leadership in the Group of 20 nations, as the Trump administration approaches its first 100 days in office, and at a time world leaders are still trying to figure out how the president will govern.

“The German audience is not that familiar with the concept of a first daughter,” Ms. Meckel said. “I’d like to ask you, what is your role, and who are you representing, your father as president of the United States, the American people, or your business?”

“Certainly not the latter,” Ms. Trump replied, adding, “And I am rather unfamiliar with this role as well, as it is quite new to me.”