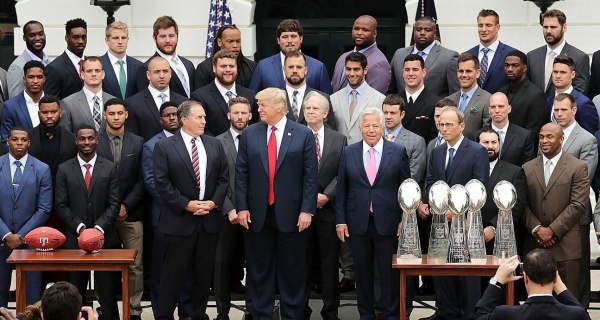 During a ceremony on the South Lawn of the White House on Wednesday, President Trump singled out several members of the New England Patriots, including wide receiver Danny Amendola, calling for them to raise a hand or step forward for acknowledgment. But Amendola was not there, nor were two dozen or more other players for the Super Bowl champions.

The customary White House visit for sports champions has become especially fraught since Trump was elected, with some athletes saying they would reject an invitation for political reasons. The issue was stark on Wednesday, when a relatively small contingent of Patriots players flanked the president.

A Patriots spokesman, Stacey James, said Wednesday night that 34 players had attended, similar to the turnout when President George W. Bush hosted them in 2004 and 2005. He said that more than 45 players attended the ceremonies in 2002, after the franchise’s first Super Bowl, and that in 2015, when Barack Obama was president, the number of players approached 50.

James said that one reason substantially fewer players showed up this time as compared to 2015 was that some veteran players did not see the need to go twice in three years.

James said, however, that the size of the Patriots’ full delegation for each trip to the White House has been roughly the same. Some photos of the ceremonies include support staff, he said, making the turnout appear bigger. That, he said, was the case in 2015.

The White House did not immediately respond to an email inquiring about Wednesday’s turnout.

Quarterback Tom Brady was among those who did not attend Wednesday’s ceremony, citing family matters. Trump did not mention Brady, the Super Bowl’s most valuable player,during the ceremony. Brady had been spotted in 2015 with one of Trump’s “Make America Great Again” hats in his locker.

The visit to the White House came the same day that a former Patriot, Aaron Hernandez, hanged himself in prison, where he was serving a life sentence for murder.

During the ceremony, Trump heaped praise on the Patriots — “No team has been this good for this long.” He also could not resist making allusions to his campaign.
New England Patriots head coach Bill Belichick presents President Donald Trump with a game helmet, beside owner Robert Kraft, during a ceremony for the Super Bowl champions on the South Lawn of the White House on Wednesday.

“With your backs against the wall, and the pundits — good old pundits, boy, they’re wrong a lot, aren’t they? — saying you couldn’t do it, the game was over, you pulled off the greatest Super Bowl comeback of all time.”

Trump also thanked Coach Bill Belichick for writing a letter before the election praising him.

“Whether you’re trying to win a Super Bowl or rebuild our country, as Coach Belichick would say, ‘There are no days off.’ ”

Trump was presented with the usual ceremonial jersey, with the No. 45 and “Trump” on the back, as well as a helmet.

Brady was the most prominent Patriot absent on Wednesday. He also skipped his team’s visit with Obama, also citing family issues.

Other Patriots who announced ahead of time that they were not going to the White House included running back LeGarrette Blount, defensive end Chris Long, defensive tackle Alan Branch, linebacker Dont’a Hightower, tight end Martellus Bennett and safety Devin McCourty.

BLOUNT in a radio interview on “The Rich Eisen Show,” said, “I just don’t feel welcome in that house.”

BENNETT told reporters after the Super Bowl: “It is what it is. People know how I feel about it. Just follow me on Twitter.” The outspoken Bennett had joked that he might move to outer space after Donald J. Trump was elected.

MCCOURTY, a team captain, told Time magazine: “Basic reason for me is I don’t feel accepted in the White House. With the president having so many strong opinions and prejudices, I believe certain people might feel accepted there while others won’t.”

Both Bennett and McCourty last fall raised their fists in protest during the national anthem for one game. At the time, athletes in various sports were protesting racial oppression in the country.

BRANCH told The Boston Globe that he was skipping the event because he was disturbed by Trump’s sexist comments captured in an “Access Hollywood” video.

HIGHTOWER told ESPN, “Been there, done that,” having visited with a championship Alabama team.

AMENDOLA meanwhile, thanked Trump “for the shout out” and said he had a funeral to attend.

Perhaps no other N.F.L. team has as close an association with Trump as the Patriots.

Just before the election, Trump claimed that he had the support of Brady and Coach Bill Belichick. Brady never explicitly endorsed Trump, but they have socialized. And there was the letter that Belichick wrote.

At a rally in New Hampshire just before the election, Trump quoted Brady: “‘Donald, I support you, you’re my friend and I voted for you.” But Brady’s wife, Gisele Bündchen, denied they were Trump supporters.

Meanwhile, disclosures filed with the Federal Election Commission on Tuesday showed that the Patriots’ owner, Robert K. Kraft, contributed $1 million to Trump’s inauguration festivities. The two men are close friends and have appeared side by side frequently since Trump took office.

Other athletes have skipped the trip over the years, many for personal reasons, but others with politics as the explicit motive.

Kraft was dismissive of news media interest in the players’ not attending this year’s ceremony, telling the “Today” show:

“It’s interesting, this is our fifth Super Bowl in the last 16 years, and every time we’ve had the privilege of going to the White House, a dozen of our players don’t go. This is the first time it’s gotten any media attention.

“This is America; we’re all free to do whatever’s best for us. We’re just privileged to be in a position to be going.”

Bruins goalie Tim Thomas declined to visit the Obama White House in 2012, saying in a statement: “I believe the federal government has grown out of control, threatening the rights, liberties and property of the people.” Baltimore Ravens center Matt Birk cited his opposition to abortion as the reason for skipping a 2013 visit.

Presidents for years have invited sports figures to the White House, but the tradition of honoring championships teams there solidified under Ronald Reagan.