UPDATE: WATCH- The Murderer Of Elderly Man On Facebook Live' Says He Killed 13 People' And Is Gunning For More 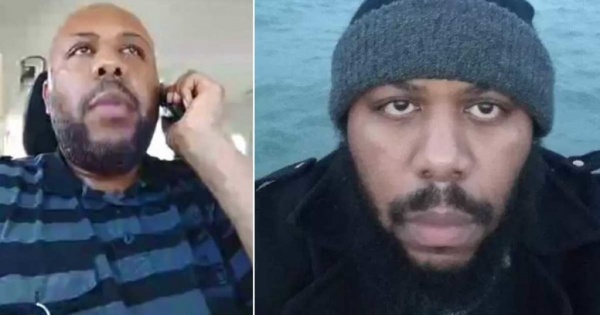 Cleveland police urged a suspect who posted video of a homicide Sunday on Facebook to turn himself in to authorities.

"We need to bring this to a conclusion today," Cleveland Police Chief Calvin Williams told reporters during a search for the suspect, identified as Steve Stephens.

"There is no need for any further bloodshed in this incident tonight," Williams added.

Stephens didn't know the elderly victim he killed around 2 p.m., before a manhunt began, according to Cleveland authorities, who did not release a motive.

Stephens also claimed to have committed multiple homicides, according to police. Williams said "currently there are no other victims that we know of."

Authorities said Stephens is a black male who is 6-feet 1-inch and weighs 244 pounds. He has a full beard.

Stephens was last seen wearing a dark blue and gray or black striped polo shirt. Stephens is driving a white Ford Fusion with temporary license plates, according to Cleveland police.

Police say he is armed and dangerous. The FBI is assisting Cleveland police in the search.

"What happened today is senseless and if Steve has an issue, he needs to talk to some folks to get that resolved," Williams said.

Victim was 'a good man'

"From what we can tell now, it's just a random person that he picked out. We don't know why," Williams said.

Goodwin had just left his children's home after eating an Easter meal and was walking home when he was killed, CNN affiliate WOIO reported.

Goodwin's daughter said: "It feels like my heart is going to stop."

'Mad with his girlfriend'

Stephens' mother, Maggie Green, told CNN she had spoken to her son on Sunday and he told her he was "mad with his girlfriend. That's why he is shooting people and he won't stop until his mother or girlfriend tell him to stop."

Green said she told her son to stop. She said she was upset and in disbelief.

Stephens is employed at Beech Brook, a behavioral health agency in northeast Ohio that serves children, teenagers and families, according to a spokeswoman for the facility.

"We are shocked and horrified like everyone else," said Nancy Kortemeyer, a spokeswoman for Beech Brook. "To think that one of our employees could do this is awful."

Kortemeyer could not provide any details on the length of Stephens' employment at Beech Brook, or his specific job title.

The hunt for Stephens caused some alarm. Cleveland State University issued an alert on social media. The shelter in place advisory was lifted Sunday evening.