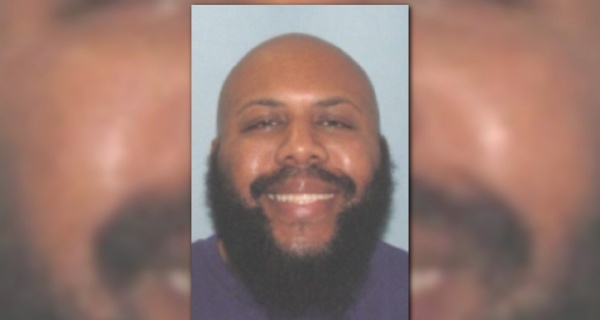 Authorities in Cleveland, Ohio made an urgent plea Easter Sunday to a man they suspect of an afternoon murder that was broadcast on Facebook Live: Turn yourself in, and don’t hurt anyone else.

Police said Steve Stephens is suspected of the fatal shooting that happened around 2 p.m. local time on the city’s northeast side near Cleveland State University.

Five hours later, Cleveland police, joined by the FBI and other local law enforcement, were still searching for Stephens. Cleveland Police Chief Calvin Williams advised the community to be vigilant and said officers were working in double and triple patrols.

“We want this to end with as much peace as we can bring right now,” Williams said at a press conference Sunday. Williams said officials are in touch with “a lot of Stephens’ friends and family” and said they’re all trying to get him to turn himself in.

Williams, who only identified the victim as “Mr. Goodwin,” said there was no apparent link between the two and that Stephens appears to have selected him at random.

“Steve Stephens, we want to communicate to you,” Cleveland Mayor Frank Jackson said at the press conference. “We’re staying to him, he need not do anymore harm to anybody, any innocent people.”

In the chilling video, which has since been pulled from Facebook, Stephens is driving in his car and complaining about a woman when he says “Found me somebody I’m going to kill, this guy right here, this old dude.”

He then approaches an elderly black man and asks him to say the woman’s name. Stephens tells the man, “She’s the reason, uh, this is about to happen to you.”

He then appears to fire a single shot at close range and walks back into his car.

A man identified by 19 News as the 78-year-old victim’s son said his father was a “good guy” who would give someone the shirt off his back.

“I’m not just saying that for these cameras like people do knowing their people ain’t right,” the man said. “But I’m telling the truth: This man right here was a good man…I don’t know what I’m going to do. It’s not real.”

As the man spoke, he hugged a woman who cried and said over and over, “It feels like my heart is going to stop.”

Facebook also published a statement regarding the broadcast that was streamed over its social media platform.

“This is a horrific crime and we do not allow this kind of content on Facebook. We work hard to keep a safe environment on Facebook, and are in touch with law enforcement in emergencies when there are direct threats to physical safety,” the company said in a statement.

“We’re coordinating with Cleveland Police and have secured the campus. We’ve ensured shelter is in place and we’ll be updating the campus in increments,” William Dube, director of communications for the university, told The Huffington Post by phone.

Williams said the department will release more information on Mr. Goodwin, the victim, later on Sunday.

“We need to get Steve off the streets, give Mr. Goodwin’s family some closure and then people can dive in later why this happened,” he said.