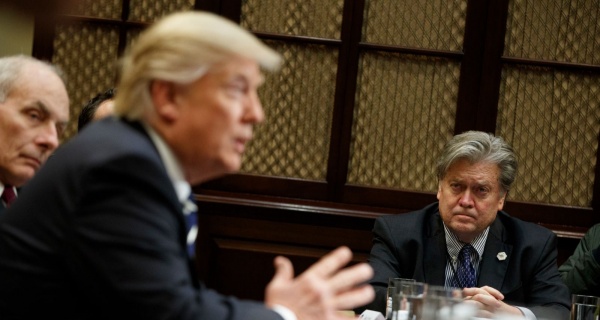 Yes, chief adviser Steve Bannon should be fired because he's a white nationalist. But he's not the source of Trump's incompetence.

The White House infighting between President Donald Trump’s neophyte son-in-law, Jared Kushner, and chief political adviser Steve Bannon has left the latter diminished. After being booted from the National Security Council last week, Bannon now faces an apparent choice between accepting subservience to influence peddlers he derides as “globalists,” or getting himself fired.

If Bannon leaves the Trump administration, liberals and members of the Washington establishment will be relieved, but for altogether different reasons. Liberals have demanded Bannon’s ouster since the day Trump announced his White House leadership team, not because Bannon embodied Trump’s threat to the Normal Way of Doing Things, but because he’s an unusually gross figure in modern politics: a vindictive bigot with dispensationalist tendencies and towering self-regard.

Three months in, it looks like Bannon’s foes will get their scalp—but only liberals will get their wish. Bannon’s expulsion would be a small victory for those who worry that Trump’s campaign and presidency have been a blow to important taboos, but it would neither indicate that Trump had been coopted by benign political forces, nor that his administration’s humiliating incompetence will come to an end.

Bannon should be fired because white nationalists should not be running the government. But he is at best a bit player in the pitiful saga of Trump’s first 100 days.

When Trump named Bannon the CEO of his campaign last year, nobody considered it a political masterstroke, nor a sign of a healthy operation. Bannon was best known in the political world at the time not as a dark-arts master, but as impresario of the insipid, racist propaganda website Breitbart.com; moreover, the title itself—CEO—had no understood meaning in the campaign world, and in any case, major staff shakeups are signs of disarray or desperation, not deft management.

The idea that Bannon is a Svengali-like political wizard stems—understandably, but not altogether logically—from the fact that Trump won. This happens quite often in politics after narrow, dubious victories. Karl Rove had no real control over who was governor of Florida in 2000, or what the makeup of the Supreme Court happened to be back then, but he left the George W. Bush campaign with the same reputational spoils he’d have earned if he’d won in a landslide. Bannon, similarly, didn’t hack the Democratic National Committee or Hillary Clinton’s campaign, and he was not the director of the FBI. Trump was already perfectly racist and obscene before Bannon molded Trump’s message into something slightly more consistent, and yet Trump garnered nearly three million fewer votes nationwide than his rival. Still, Trump’s electoral college victory was tabula rasa for a man whose main claim to fame was being one of the country’s most influential white nationalists.

The same basic fallacy most likely explains why Trump gave Bannon a seat of immense power within his administration, on a par with his chief of staff, Reince Priebus, and Kushner.

Democrats led an ill-fated political campaign to #FireBannon last year, but since he was a fiat hire, they could only have succeeded if Republicans had joined them and threatened to withhold support for Trump’s priorities (particularly his Senate-confirmed cabinet) unless Trump sent Bannon packing. Liberals were, of course, correct to want Bannon and his appalling worldview banished, and to worry that his ascent portended an administration that would be cruel, erratic, incompetent, and dangerous. But the connection between the two isn’t particularly direct.

Bannon figured heavily in the crafting of an executive order banning millions of Muslims around the world from entering the U.S., but he did such a disastrous job that the policy has been enjoined by courts nationwide. He may ferret around town trying to strong-arm cabinet officials, and bark orders at members of Congress who are answerable only to their constituents, and try to wow the inarticulate president with malapropisms, but he has been a notably ineffective operator—the kind of buffoon liberals might want to keep around as a drag on the unified GOP government, if he weren’t such a nasty figure.

Trump has failed because he has little in the way of clear substantive objectives or strategies to meet them, and he lacks the interest in or knowledge of policy and process that he’d need to correct course. Even if he had a good ear for sound advice, and the patience required to follow it, he is surrounded by amateurs and opportunists who send him endlessly careening between contradictory goals and various tactical dead ends.

It was not Bannon who misled Trump into believing Republicans were required to pass a hideously unpopular health care plan before writing a tax cut bill or doing anything else. That was House Speaker Paul Ryan.

It’s unclear who convinced Trump to lob missiles at Syria (it may have been official advisers or the honorary ones who babble away on Fox News), or whether the decision will turn out to be a one-off or the beginning of a dangerous escalation, but it wasn’t Bannon’s doing. The fact that Trump reversed administration policy in favor of regime change in Syria on a dime, and may or may not order further strikes, while U.N. Ambassador Nikki Haley and Secretary of State Rex Tillerson contradict each other in official statements, is all a function of Trump’s own mismanagement and whimsy.

When the transition began, Kushner was reportedly unaware that Trump would have to replace essentially the entire West Wing staff—so naturally Trump tasked him with reorganizing the entire federal government (as well as managing relations with China and Mexico and seeking peace in the Middle East). Bannon is a careless blowhard, but he’s at least as qualified to “deconstruct” the administrative state as Kushner is to manage any of these life-and-death initiatives.

Bannon has argued, according to The New York Times, “that Mr. Kushner’s efforts to pull his father-in-law more to the center on issues like immigration would poison him with the conservative base—a hopeless position to be in because Mr. Bannon believes so few Democrats would ever consider supporting Mr. Trump.” It is a self-serving, defensive special pleading, and almost certainly 100 percent correct. Bannon’s reign might be dysfunctional, but Kushner’s would fail in different ways.

We’ll be better off in important ways if Trump fires Bannon. And the broader sidelining of the protofascists in Trump’s retinue should, among other things, give us hope that the Bannonite goal of dismantling the post-war order in Europe won’t continue to be a big influence on U.S. foreign policy. But the fact that the cucks are winning an internecine struggle for influence over Trump will not meaningfully diminish the risk of having a man of Trump’s temperament and character at the helm of government. It is a triumph of nepotistic delusions of grandeur over batty white supremacist ones, which is an improvement of a kind, but at the end of the day, the same man pitted these two delusions against one another, and he’s still the president.