Fourteen Year Old Survives First Attempt On His Life, But Dies in Hail Of Bullets In Second Attempt 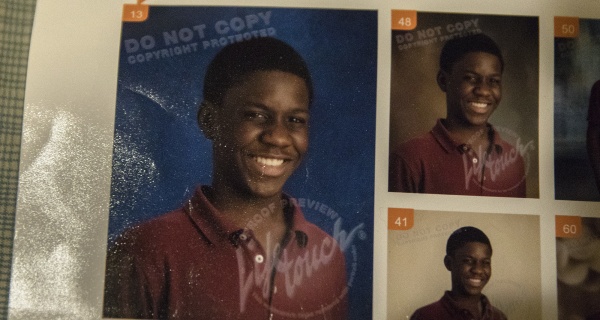 On Saturday, for the second time in less than two years, Luciana Sanders got the news that her teenage son had been shot.

Last year, Laquan Allen was shot in the thigh. He recovered.

Saturday afternoon, someone came again for 14-year-old Laquan, who was on a sidewalk near a Chicago Park District playground in the 4900 block of West Hubbard Street.

He did not survive.

Laquan lived with Sanders' mother, Dieanna Ward, 65, on the 4200 block of West Augusta Boulevard, and had kissed them both on the cheek before leaving the house that morning.

He liked school at McNair Elementary, 4820 W. Walton St., but his true love was basketball and he hoped to be a professional player one day, they said.

Even last year's attack couldn't keep him from going out to the streets, Ward said.

Sanders believes that her son was being pressured by his friends to join a gang. Ward said he had already gotten into trouble for stealing a car, and she believes that the shooting was targeted.

He had no reason to get in trouble, but he bowed to peer pressure, Sanders said. She started crying again as she looked at a school photo of Laquan.

"That's what he like to do, is smile," she said, her eyes watering and voice cracking.

Just after 3 p.m. on Saturday, Laquan was shot in the buttocks and was taken to Mount Sinai Hospital, where police said his condition had been stabilized. He later was pronounced dead. Laquan was on the sidewalk when a vehicle drove by and someone inside shot him, according to police.

Laquan is at least the fourth person fatally shot on that block since November 2011, and at least the 15th person shot on the block in that time, according to data compiled by the Tribune.

Ward was the first to find out about Laquan — one of his teachers called her. She and Sanders started calling hospitals to find out where he was.

When they got to Mount Sinai, they were told that Laquan was dead.

"As a parent it's hard, it's very hard," Sanders said. "Whoever took my son away from my family and me, they don't know the feeling."

Ward sat next to Sanders, shaking her head.

"We want to know the reasons, what was the cause?" Ward said. "He was a good kid."

Laquan loved to smile, loved to joke around and loved to give them kisses, Sanders said. He never missed an opportunity to play with his baby sisters or joke around with his 90-year-old great-grandmother, who also lived with them.

"It's hard," Ward said. "It's hard knowing that I won't see him come through the door tonight."

Ward was trying to move away from the city to protect her family from the violence. She was thinking about Mississippi or somewhere she can get a house.

"We live it every day. We know that something will happen to our babies, our children, our godchildren, the younger ones," Ward said.

Her mind has been blank since she found out about Laquan's death, she said.

"Whoever it is that killed my son, they need to come forward," Sanders said. "Even if it was an accident, just please come forward and say that you done it ... My son did not deserve this."

Late Saturday afternoon, Kevin Davis, 49, who lives near where the shooting occurred, said he was inside watching TV with his kids when he heard three shots ring out.

The crime scene was adjacent to Hubbard Park, which includes a playground, and which stood out among the boarded-up windows of houses on the block. The rain did nothing to mute the bright colors of playground equipment.

Giant potholes pockmark West Hubbard Street, and the ground was covered in gravel. Police officers used a push broom to comb through the runoff that gathered in the gutter.

A boy wearing a maroon hoodie, matching pants and a black bomber jacket stood watching police officers working at the scene, tears streaming down his face. He was a friend of the victim, he said. Before leaving, he took a selfie with the crime scene in the background.

At least 11 others were found shot, one fatally, from Saturday into early Sunday.

At 1:40 a.m., one person was killed and two others were wounded during an argument in a Gresham apartment building. They were with a group of people when they began arguing with another group in the entryway to an apartment building in the 900 block of West 76th Street, and two people pulled out guns and opened fire.

A 29-year-old man was shot in the back, and a 30-year-old woman was shot multiple times. Both were taken to Advocate Christ Medical Center in critical condition. Another woman, 28, was grazed in the chest and declined medical attention.

The 30-year-old woman was pronounced dead at 6:15 a.m. Sunday at Advocate Christ Medical Center. She was identified as Tanisha Jackson, of the 6200 block of South Talman Avenue, according to the Cook County medical examiner's office.

About 15 people were in the first-floor apartment nearby for a family party when the shooting happened. Tina, 30, was in the back room smoking when the shots rang out.

She crawled to the front room, calling her family members' names. That's when she saw her friend lying on the floor with gunshot wounds.

She doesn't come in from her suburban Bolingbrook home often anymore, she said. "I keep my distance from Chicago because of this."

Tina watched as police detectives drove up, got out of their car and walked across Peoria Street. She began to cry. "I just hope she didn't die."

About 4:35 a.m., a 54-year-old man was shot in the left arm during an argument in the 300 block of South Pulaski Road in West Garfield Park, police said. He was taken in good condition to Stroger Hospital. The shooter remained at the scene and was taken into custody by police. Charges against the man who shot the 54-year-old man were pending.

About 2:45 a.m. Sunday, a 21-year-old man was critically wounded in a Gresham shooting. He was driving north in the 7600 block of South Winchester Avenue when another car pulled up and someone inside fired shots, hitting him in the head and right leg. The man was found in the car nine blocks north, near the corner of Wolcott and Marquette Road. From there, he was taken to Advocate Christ Medical Center in critical condition.

About 12:25 a.m., a 25-year-old man was grazed by a bullet in South Austin, police said. He was in the driver's seat of a parked car in the 100 block of North Laporte Avenue when a maroon Jeep pulled up and someone inside fired several shots at him, police said. He was grazed in the right shoulder and went to an area hospital in good condition. Information about which hospital was not immediately available.

On Saturday night, two men were shot within moments of each other in the West Pullman neighborhood on the Far South Side.

A 28-year-old man was shot in the 12200 block of South Green Street about 9:06 p.m. He suffered graze wounds to the face and hand and was taken to Advocate Christ Medical Center in Oak Lawn in good condition.

About five minutes earlier, a 32-year-old man was shot just a few blocks away, in the 12200 block of South Carpenter Street. He got himself to MetroSouth Medical Center with a gunshot wound to the hand and told authorities he was on the corner when someone on foot shot him. He was listed in good condition.

On the Near West Side two hours after Laquan was shot, a 16-year-old boy was shot in the right lower back in the 1300 block of South Racine Avenue, according to police. The boy was initially taken to UIC Medical Center, but he was later transferred to Stroger Hospital, where his condition was stabilized. The teen told investigators that he was walking when three people came up to him and one shot him.

Earlier Saturday afternoon, a 24-year-old woman was shot in a road rage incident on the Far South Side. She was in a vehicle about 1:35 p.m. in the 1500 block of East 95th Street when someone in another vehicle fired shots. The woman was struck in the right leg, police said. Police said the shooting appeared to be the result of road rage. The victim went on her own to Advocate Trinity Hospital, where she was listed in good condition.

Another gunshot victim showed up at Mercy Hospital and Medical Center on Saturday and reported he had been shot Friday night in the Archer Heights neighborhood, police said. The 20-year-old man said he was in the 5100 block of South Kostner Avenue about 10 p.m. when a vehicle drove by and someone fired shots. The man was in good condition with wounds to the lower left side of the body, police said.