Pure Insanity: An Up Close Look At The Ruthlessness Of Trump And The Republican Party 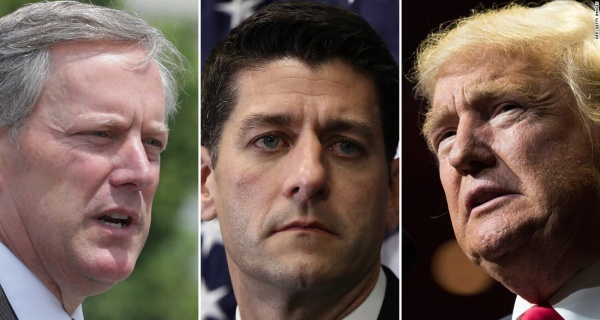 The bill failed, but Americans learned just how far Republicans will go to try and destroy President Obama's legacy.

After two days of frantic scrambling, hasty rewriting, and unadorned begging, House Speaker Paul Ryan was forced to pull his Trumpcare bill from the House floor before Friday's scheduled vote, delivering the most devastating blow yet to a struggling president eager to show his supporters that he is cut out for the task of governing. It's an embarrassing loss for a newly-unified Republican government, which ran on a platform promising to repeal and replace the Affordable Care Act and then, when their opportunity to do so finally arrived, pulled off the legislative equivalent of blowing a 3-1 lead in the NBA Finals.

The frenetic three weeks that have elapsed since Paul Ryan debuted the bill have, to use a medical term, sucked. Each day seemed to yield another grim estimate of how the bill would gut health care benefits for millions of Americans, followed by a hasty, ill-conceived rebuttal of those estimates from the powers that be, followed by another Paul Ryan tweetstorm of nonsensical technobabble accompanied by a picture of him standing in front of an American flag. Even as the crowds of skeptics grew larger and louder and Brietbart-ier, Republicans doubled down, insisting that their proposal would be the only opportunity to get rid of Obamacare, and that holdouts could fall in line or get wrecked in two years. The result was a poorly-understood Frankenstein's monster of a bill that was literally re-written overnight in a desperate, futile attempt to scrape together the necessary votes. Calling this debacle a goat rodeo would be an insult to the noble men and women of the goat rodeo industry who work hard to organize novelty livestock shows for your entertainment.

Hours before the Republicans' first self-imposed deadline for voting on Trumpcare, word leaked out that if Ryan wanted to cajole his party's unruly extremists—the bald eagle belt-buckled members of the hyperconservative House Freedom Caucus—into throwing their support behind the bill, he would have to make just a few small tweaks first.

I'm genuinely flabbergasted. If things like prescription medicines and preventative care aren't covered, what the heck is even left to insure anymore? Stop for a minute and think about how ludicrous it is that this gaggle of Ayn Rand-humping rubes were unwilling to support an outrageously irresponsible, universally-loathed health care proposal that would kill people unless they could put their heads to gather and find ingenious ways to ensure that it would kill more people. The Freedom Caucus' insane wish list wouldn't "reform" health care in America. It would destroy it.

The only person not named Donald Trump who comes out of this looking worse than Mark Meadows and his cronies is Paul Ryan, whose astonishing willingness to really consider their demands in a craven attempt to buy votes once again proved that his "repeal and replace" crusade was never about improving health outcomes or promoting "free markets" or finding a #BetterWay. It was about destroying anything and everything remotely related to President Obama, who spent eight years as the primary target of obsessive Republican teeth-gnashing vitriol, regardless of the implications that doing so would have for the lives of their spouses, their children, their families, and the millions of constituents whose interests they so despicably profess to represent.

Don't let the fact that Paul Ryan failed so catastrophically distract you from the fact that in the process, he revealed himself to be an amoral, unfeeling automaton who places political oneupmanship above all else, and who was ready to blame poor people for "choosing" their problems because he was either unwilling or incapable of doing the work of actually finding ways to ensure that Americans have access to the health care they need.

Trumpcare would have made life worse for Americans by just about every evidence-based metric, and it's okay to celebrate the fact that stiff, persistent, and vocal resistance helped ensure that the proposal met an ignominious end before even making it to the House floor. That said, the House Freedom Caucus' demands and the Speaker's reaction to them together revealed just how far the powers that be in charge of this country are willing to go in order to get their way on this—whatever the consequences for the American people. Although this loss has to sting, Ryan been a dog after a bone about this issue for a solid seven years now, and it seems pretty unlikely that he'll give up on his fondest drunken fratboy dream altogether. The Affordable Care Act remains alive, but as long as the Republicans hold the White House and their legislative majorities, we are very much still in the woods.