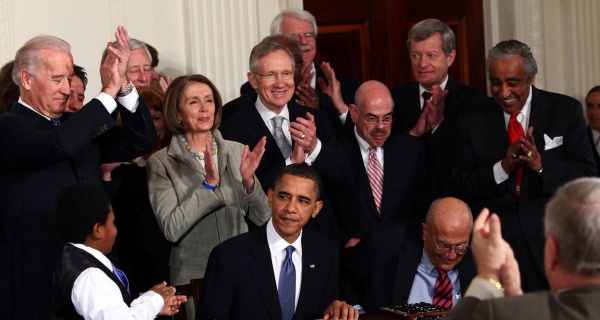 Barack Obama has remained relatively quiet in his first few months as an ex-president, but on Thursday, the seventh anniversary of the Affordable Care Act, he broke his self-imposed silence to deliver a vigorous defense of the law that has come to bear his name.

Obamacare is not the disaster it’s been made out to be, he wrote in a statement. In fact, the country is better off for it.

Obama urged lawmakers to scrap their “repeal and replace” efforts, and instead build on the success of the ACA.

“If Republicans are serious about lowering costs while expanding coverage to those who need it, and if they’re prepared to work with Democrats and objective evaluators in finding solutions that accomplish those goals — that’s something we all should welcome,” Obama added. “But we should start from the baseline that any changes will make our healthcare system better, not worse for hardworking Americans.”

That line is about as close as Obama came to referencing the ACA replacement that House Republicans have offered, which would undoubtedly make health care “worse” for working Americans.

Though he previously said he’d remain out of the political fray unless it was clear that “our core values may be at stake,” Obama has made a couple of statements since Trump’s inauguration. The first was a short message to protesters who filled U.S. airports in the aftermath of Trump’s first travel ban. With Thursday’s more forceful statement on the ACA, Obama appears to be inching closer to rejoining the political fray. As former Attorney General Eric Holder said late last month, “He’s ready to roll.”