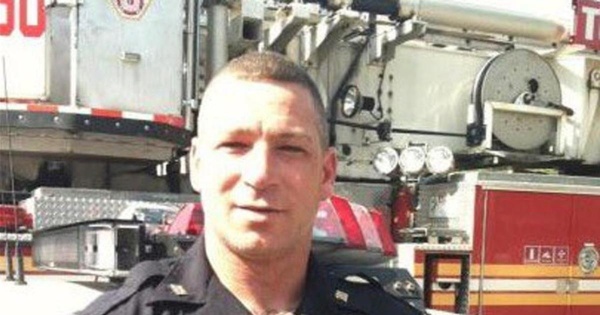 A New York City cop who became a viral sensation when he twerked with a marcher at an LGBT Pride parade died this week of brain cancer at the age of 44.

According to the New York Daily News, Officer Michael Hance — a 17-year veteran of the NYPD — developed the cancer as a result of working at the site of the World Trade Center after the terrorist attacks of Sept. 21, 2001.

Hance — who identifies as straight — became a symbol of the progress LGBTQ people have made when he cheerfully danced with a gay man in a video shot during Manhattan’s Pride Week 2015.

“That was the best part … that he was straight and was still having fun at the parade,” she said. “That was a great message to send. A lot of cops have a tough-guy vibe, but he had the vibe that you can have fun and there was nothing wrong with that.”

For many LGBTQ people who have spent their lives in fear of police violence, the video became a symbol of what a better world could look like.

Hance collapsed in front of his home in November and complained that he felt dizzy, his brother, Peter Hance, 46, told the Daily News. Diagnostic testing revealed a brain tumor, which metastasized into his lungs, liver and chest.

The father of two died on Sunday. Peter Hance said that daughters Kaitlyn, 12, and Jenna, 10, were everything to their father.

“Those two daughters were his life,” his brother said. “They’re going through a rough time right now.”

Cancers related to the 9/11 attacks and cleanups have surged in recent years. More than 70 types of cancer are being traced to exposures at Ground Zero and the air in New York after the disaster. Some researchers are saying that the health fallout from the disaster is coming to rival that of the nuclear fire at Chernobyl nuclear power plant in the former Soviet Union.

Hance worked on the “bucket brigade” of volunteers who hauled debris out of the ruins of the World Trade Center at Ground Zero in 2001 and 2001.