Trump's Favorite Saying, 'I'm The Least Racist Guy You Will Ever Know'. What Is His Logic Behind That Claim? 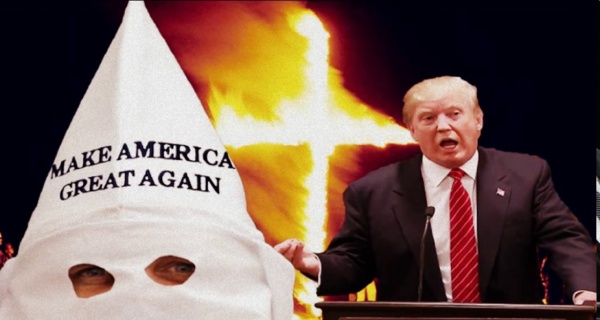 The scale of racism (or just about anything) goes from most to least (or vice versa), so even if you say you're the least racist guy, you're still on the scale.

The same is true for anti-Semitism.

Every time the question of racism or anti-Semitism in America comes up, so-called President Trump goes into his little spiel about being the "least racist guy" or the "least anti-Semitic guy." At his psychotic press conference last Friday he deflected the question entirely by bragging about his "landslide" 306 electoral vote victory.

The point is, being the least of anything doesn't mean you're not that thing. With regards to adherence to religious doctrine, my friend Kyle may be one of the least Jewish people I know, but he is still Jewish.

I am not nitpicking here. I am wondering if this man who calls himself "like a really smart person" is too stupid to understand the difference or if he is choosing his words very carefully.

Words are important, they have specific meanings. Usually when people say, "I could care less" they really mean, "I couldn't care less." Two completely different meanings.

I don't know if Donald Trump is a racist or if he is anti-Semitic. In truth, no one can know what is in another person's heart. All we are left with are a person's words and actions and, in the case of Donald Trump the case for either can certainly be made.

Before you start up about the fake media, remember that Joe Scarborough, whose name appears in the title of the show is an outspoken, conservative Republican. He's also a pretty fair musician.

Another thing that we know is that the man closest to Donald Trump made a fortune providing a platform for what we euphemistically call the "Alt Right," which is just a polite way of referring to hate mongers. They are racists, bigots, anti-Semites, white supremacists, Nazis...all the bad stuff and Steve Bannon was their megaphone.

Sean Spicer likes to say that President Donnie has made himself abundantly clear and indeed he has. If you look at footage from any of Trump's rallies you will find no shortage of rebel flags, the number one symbol of racism in America.

If rebel flags are a tribute to another way of life, it is a way of life built upon white people owning black people, pure and simple. Nothing noble about it.

We watched as candidate Donnie choked on his words as he was unable to disavow David Duke, long time leader of the Ku Klux Klan. We watched as hate groups across the country celebrated their newfound freedom of expression with the election of Donald Trump.

We saw hate crimes rise exponentially with the election of Donald Trump, perpetrators telling their victims that this is the new America, now that Trump's our president.

We saw Donald Trump omit the very mention of Jews from a speech about the Holocaust.

1. He could make it abundantly clear to people at his KKK-like rallies, like the one in Melbourne, Florida,  that anti-Semitism and racism of any kind will not be tolerated by his administration.