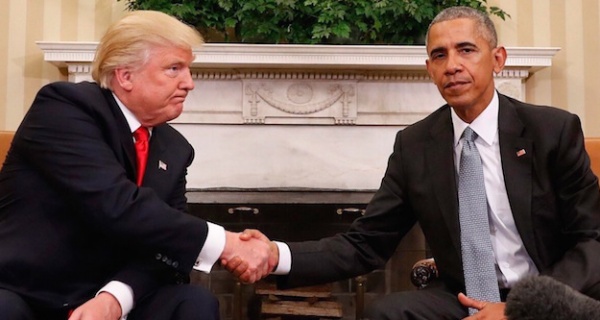 President Trump on Saturday angrily accused former president Barack Obama of orchestrating a “Nixon/Watergate” plot to tap the phones at his Trump Tower headquarters last fall in the run-up to the election.

Citing no evidence to support his explosive allegation, Trump said in a series of five tweets sent Saturday morning that Obama was “wire tapping” his New York offices before the election in a move he compared to McCarthyism. “Bad (or sick) guy!” he said of his predecessor, adding that the surveillance resulted in “nothing found.”

Trump offered no citations nor did he point to any credible news report to back up his accusation, but he may have been referring to commentary on Breitbart and conservative talk radio suggesting that Obama and his administration used “police state” tactics last fall to monitor the Trump team. The Breitbart story, published Friday, has been circulating among Trump's senior staff, according to a White House official who described it as a useful catalogue of the Obama administration's activities.

A spokesman for Obama did not immediately reply to a request for comment.

Trump has been feuding with the intelligence community since before he took office, convinced that career officers as well as holdovers from the Obama administration have been trying to sabotage his presidency. He has ordered internal inquiries to find who leaked sensitive information regarding communications during the campaign between Russian officials and his campaign associates and allies, including Attorney General Jeff Sessions and ousted national security adviser Michael Flynn.

“It's highly unlikely there was a wiretap,” said one former senior intelligence official familiar with surveillance law who spoke candidly on the condition of anonymity. The former official continued: “It seems unthinkable. If that were the case by some chance, that means that a federal judge would have found that there was either probable cause that he had committed a crime or was an agent of a foreign power.”

A wiretap cannot be directed at a U.S. facility, the official said, without finding probable cause that the phone lines or Internet addresses were being used by agents of a foreign power — or by someone spying for or acting on behalf of a foreign government. “You can't just go around and tap buildings,” the official said.

Trump sent the tweets from Palm Beach, Fla., where he is vacationing this weekend at his private Mar-a-Lago estate. It has long been his practice to stir up new controversies to deflect attention from a damaging news cycle, such as the one in recent days about Sessions and Russia.

Trump's tweets took numerous top White House aides by surprise, according to a second White House official who was not authorized to speak publicly. Saturday was expected to be a “down day, pretty quiet,” this official said, and there was little, if any, attempt to coordinate the president's message on the wiretapping allegations.