Its Not Just Sessions: Commerce Sec. Has Ties To Russians 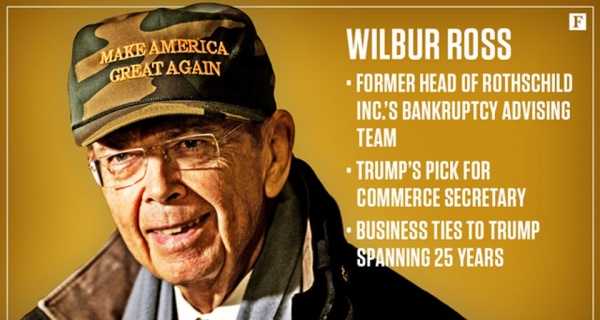 A study prepared exclusively for DCReport.org by James S. Henry reveals deep financial ties between Donald Trump’s nominee for Commerce secretary, Wilbur Ross, and three Russian oligarchs, whose lives and fortunes depend on staying in the good graces of Vladimir Putin.

These connections raise many new questions about Trump’s reliance on the Putin regime, which all 17 U.S. intelligence agencies say interfered in the presidential election on Trump’s behalf, but which Trump disputes.

These relationships between nominee Ross and the oligarchs involve ownership and management of a European bank with a reputation for laundering Russian money and making bad loans.

The study also compared flight records of Trump’s campaign plane and a plane used by one of the oligarchs. During the campaign, the two planes often were at the same airports at the same time.
Henry, DCReport.org’s senior editor for economics investigations, gathered the information and connected the dots.

Henry is a lawyer and former chief economist for the McKinsey & Co. business consulting firm. He abandoned his executive career to spend more than four decades exposing corrupt international banking.

In 1976 Henry became the first person to urge eliminating large denomination bills to thwart drug trafficking and tax evasion. Henry served as a consultant on the massive Panama Papers that revealed a global network of tax evasion and other dubious financial practices of the international elite.

The records Henry combed through shows that Ross and his team invested more than $1 billion in the troubled Bank of Cyprus. Ross became one of two vice chairman of the bank. Putin appointed the other.

Soon Ross named a new chairman, who earlier left under a cloud as chairman of Deutsche Bank. On that chairman’s watch, Deutsche Bank paid $20 billion in fines. Among these was a $650 million fine for helping launder Russian money through Deutsche Bank offices in Moscow, New York City and Cyprus.

Deutsche Bank is Trump’s largest known lender, having extended him more than $300 million of loans that remain outstanding.

Why Ross would appoint anyone with such a poor record of banking conduct, and why he worked with the Russian oligarchs, remains a mystery.