AG Sessions Should Be Charged With Perjury For Russian Lies 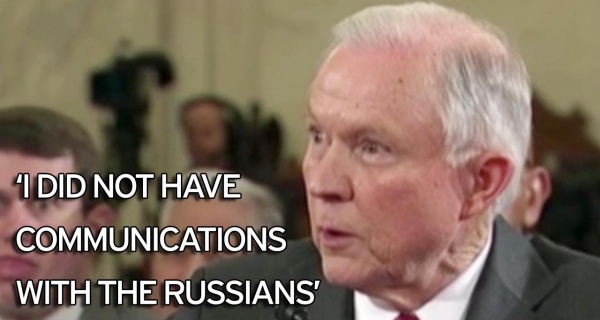 Senator Al Franken (D-Mn) is looking at his exchange with Attorney General Jeffery Sessions during his confirmation hearings a little differently today. In January, Franken asked Sessions specifically about meeting with Russian officials. Sessions adamantly denied any communications with the Russians at the time. Last night, reports came out that Sessions did indeed meet with Russian officials at least twice.

Since the report, first reported by The Washington Post, Sessions has changed his story twice, as Franken noted;

Morning Joe host and former GOP Congressman was less “charitable” than Franken was, calling what Sessions said as a “lie” and “perjury.”

Co-host Willie Geist asked Franken if Sessions would have been upfront about the meetings during the confirmation process, and stated that it was under his responsibility as a Senator on the Foreign Affairs Committee, would that have settled the issue? Franken responded by pointing out that no other member of that committee had any cause to meet with any Russians, yet Sessions somehow needed to meet with them twice. Franken called that “suspicious.”

Going forward, the Minnesota Senator said that at the very minimum, Sessions needed to immediately recuse himself from any of the investigations concerning Russian interference in the 2016 election. He also would like to see Sessions definitively answer the questions that are now being raised.

Elise Jordan asked “what would it take” to put this matter to bed. Franken said an independent investigation was vital. Also, that President Trump needed to release his tax returns. Franken added that he had doubts whether Trump’s claim that he couldn’t during the campaign because of an IRS audit were suspect as well — pointing out that Trump couldn’t even produce the standard form letter that auditors send people informing them that they are under audit.

Franken also mentioned that another Trump cabinet member, Wilbur Ross, needed to clear up reports that he is a major stakeholder for The Bank of Cyprus, which, according to Franken has been found to be a money laundering operation for the Russians.

Check out Senator Franken’s full interview on Morning Joe below;

Franken and the Democrats are slowly finding some Republican allies as new revelations come to light. Conservative leaders Kevin McCarthy and Jason Chaffetz have now also called for Sessions to recuse himself from any investigations.