Watch: Obama For President Of France? 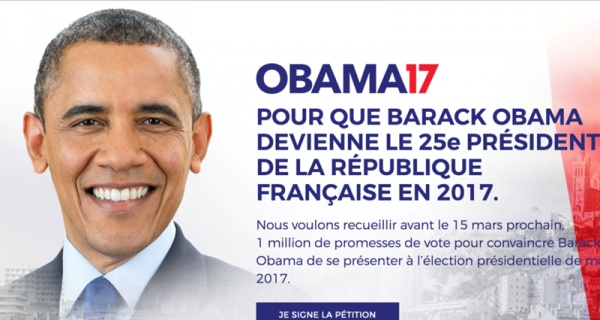 Many voters in France cannot identify all the candidates running for president, who now number more than a dozen. But they recognize the smiling politician on campaign posters with the slogan “Oui on peut.”

That’s French for “Yes we can.” While the politician, Barack Obama, is American, that has not stopped a group of Parisians who have started a campaign to persuade him to run for president of France.

They say they are deeply uninspired or worried by the actual candidates, most notably Marine Le Pen, the far-right politician who is leading in the polls.

The organizers have placed red-white-and-blue posters with Mr. Obama’s portrait, and the French translation of his slogan, around Paris to publicize their campaign.

“There isn’t one man or woman that we can project ourselves onto, someone we would want to vote for and fight for without hesitation, someone who unites people and has a strong aura,” one of the French organizers said of why they are supporting Mr. Obama.

The idea was originally conceived as a joke, concocted recently over drinks with friends, said the organizer, who asked to be identified only by the name Antoine.

He described himself as a fan of the Yes Men, the famous political pranksters, and said that he and his friends were surprised by how many people had signed their online petition. By Tuesday evening, it had attracted more than 43,000 signatures.

The goal is to gather one million signatures by March 15 to convince Mr. Obama that he should run because “he has the best C.V. in the world for the job,” according to the petition.

Kevin Lewis, a spokesman for Mr. Obama, declined to comment.

Europeans viewed Mr. Obama’s departure from office with a mix of admiration and regret, and for those who have struggled to come to grips with President Trump’s attitude and policies, that feeling has only intensified.

“I think the timing of it all means that people are very nostalgic of Obama,” Antoine said.

But the organizers do not have French law on their side.

Presidential candidates must be at least 18 and part of the French electorate. They must gather the signatures of at least 500 elected officials from around the country to be put on the ballot, a requirement introduced by President Charles de Gaulle in 1962. (At that time, the bar was 100.)

Most important, they have to be French.