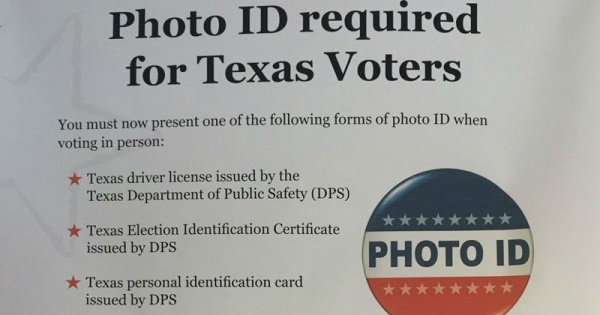 The Justice Department on Monday dropped a crucial objection to Texas’ strict voter-identification law, signaling a significant change from the Obama administration on voting-rights issues.

The Republican-led Texas Legislature passed one of the toughest voter ID laws in the country in 2011, requiring voters to show a driver’s license, passport or other government-issued photo ID before casting a ballot.

The Obama administration’s Justice Department sued Texas to block the law in 2013 and scored a major victory last year after a federal appeals court ruled that the law needed to be softened because it discriminated against minority voters who lacked the required IDs.

Opponents of the law said Republican lawmakers selected IDs that were most advantageous for Republican-leaning white voters and discarded IDs that were beneficial to Democratic-leaning minority voters. For example, legislators included licenses to carry concealed handguns, which are predominantly carried by whites, and excluded government employee IDs and public university IDs, which are more likely to be used by blacks, Hispanics and Democratic-leaning younger voters.

But the Justice Department under President Trump and Attorney General Jeff Sessions told a judge on Monday that it was withdrawing its claim that Texas enacted the law with a discriminatory intent.

The Justice Department remains a party in the case. But it is pulling back at a crucial phase. If a judge finds the state acted with discriminatory intent, as the Justice Department and other plaintiffs have alleged, Texas could be forced to seek federal approval before it makes any changes to its voting laws or procedures. That would have major impacts on voting rules in Texas and be a potent symbol of the ability of the federal government to be a major brake on voting discrimination nationally.

“This is a complete 180-degree turn,” said Danielle Lang, a lawyer for the Campaign Legal Center, one of the groups that sued Texas and represents some of the Justice Department’s fellow plaintiffs in the voter ID case. Under the Obama administration, she added, the Justice Department was “fully committed to the case.”

“They were full partners,” Ms. Lang said. “This was their case as much as ours.”

The Texas Legislature is considering a new voter ID bill that will allow those who have difficulty obtaining the appropriate IDs to vote as long as they sign an affidavit and show more widely available types of identification, including a utility bill or a bank statement. In documents filed on Monday, the Justice Department said that in light of the recently filed bill, it was withdrawing its discriminatory-intent claim to allow “the Texas Legislature the opportunity to rectify any alleged infirmities with its voter identification law.”

The agency added that the Supreme Court has emphasized that “federal courts should allow state legislatures the first opportunity to remedy voting rights violations.”

The decision was the second time in a week that the Trump administration retreated from the Justice Department’s stance in a major civil rights case. One week ago, the department — with the backing of Mr. Trump — withdrew a policy imposed by the Obama administration to give federal anti-discrimination protections to transgender students in schools. Mr. Sessions, who was battered by Democrats at his confirmation hearing over his opposition in the Senate to some voting and civil rights measures, pushed for the reversal on the transgender issue over the objections of Betsy DeVos, the education secretary, officials said.

The reversal in the Texas case was all the more striking because it came just three months after the Justice Department, under the Obama administration, filed a brief arguing on behalf of the very issue it backed away from Monday — that the Legislature intentionally sought to discriminate when it approved the law.

Under the Trump administration, the Civil Rights Division of the Justice Department is expected to undergo the most severe shift in philosophy of any section under the Trump administration, and Mr. Sessions appears to be quickly meeting those expectations. On a number of civil rights and voting measures during his days in the United States Senate, Mr. Sessions saw the federal government as improperly meddling in issues he said should best be left to the states.

Attorney General Jeff Sessions on Capitol Hill this month. Although the Justice Department is set to drop a claim against Texas, it will remain a party in the case, but most likely in a smaller role.

Other important voting rights decisions loom for the Justice Department. Perhaps the most closely watched is in North Carolina, where the courts have ruled that a voting measure was devised specifically to disenfranchise minorities. The Justice Department under the Obama administration helped fight to overturn the law, but Mr. Sessions has not said what he will do.

The move on Monday in Texas came before a federal judge in Corpus Christi was scheduled to hear arguments on the discriminatory-intent issue on Tuesday.

The case will proceed because the parties that sued Texas — including voters, elected officials, civil rights organizations and black and Hispanic advocacy groups — will continue the lawsuit.

“We stay the course,” said Kristen Clarke, the president and executive director of the Lawyers’ Committee for Civil Rights Under Law, which is part of the legal team representing the Texas branch of the N.A.A.C.P. and the Mexican American Legislative Caucus.

But the reversal by the Justice Department — after a team of lawyers in the Civil Rights Division spent more than three years and more than $1 million on the case — angered Texas Democrats and advocates for voting rights. The Justice Department’s involvement in Texas’ voter ID law predates the lawsuit it filed against the state in 2013. The agency has been formally reviewing the law for nearly six years, starting in 2011, and made its first official objection to aspects of it in March 2012.

“I am appalled and disgusted that D.O.J. would abandon their claims, that they have advocated for years, that Texas’ photo ID law was enacted with a racially discriminatory purpose,” said J. Gerald Hebert, a lawyer who represents several of those who sued Texas, including the League of United Latin American Citizens and Marc Veasey, a Democratic Texas congressman who is African-American.

Officials from the Justice Department and the Texas attorney general’s office declined to comment on the case.

In July, the most conservative federal appeals court in the country — the United States Court of Appeals for the Fifth Circuit, in New Orleans — found that the law had a discriminatory effect on minority voters and set in motion a loosening of the ID rules for the November elections.

The judge in Corpus Christi — Judge Nelva Gonzales Ramos, of the United States District Court for the Southern District of Texas, who oversaw a trial on the voter ID case in 2014 — is weighing the evidence on whether Texas enacted the law with a racially discriminatory intent.

If the judge finds discriminatory intent, Texas could be forced to seek federal approval before it makes any changes to its voting laws or procedures. For decades, Texas and several other mostly Southern states with a history of discrimination had been required to seek advance federal approval before making changes to their voting laws. But Texas and the other states were freed from that requirement in 2013, after a Supreme Court decision that invalidated key provisions of the Voting Rights Act. A finding of intentional discrimination, however, could once again put Texas under federal supervision, making it the first state brought back into so-called preclearance since the Supreme Court’s 2013 ruling.

The Texas attorney general, Ken Paxton, as well as his predecessor, Greg Abbott, who is now governor, have denied that the Legislature intentionally discriminated against minority voters, arguing that the law was aimed at preventing voter fraud.

But critics say the law has more to do with suppressing the turnout of those likely to vote Democratic than preventing fraud.

Whatever the case, Richard L. Hasen, a law professor at the University of California, Irvine, and an election-law expert, said he saw the Justice Department’s action on Monday as “a sign of things to come.”

“This is the first step in what I expect to be a series of steps, with D.O.J. siding with the state of Texas,” he said. He add