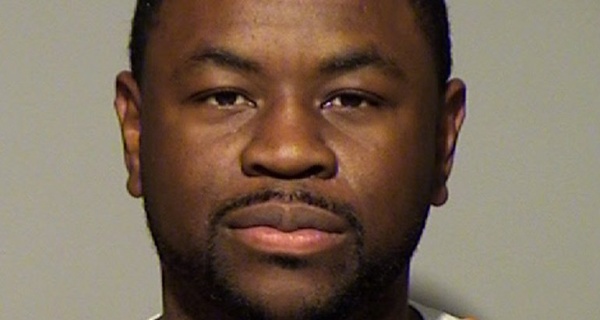 Antonio Smith looks to the gallery as he leaves a Milwaukee County Circuit Court after pleading guilty on Wednesday in two homicides and conspiring in a third.

More than a week into a jury trial, a Milwaukee man stopped the proceedings and instead pleaded guilty to two homicides and a conspiracy to commit a third.

Antonio Smith, 35, faces a maximum sentence of life in prison after he was convicted Wednesday of killing Eddie Powe and a witness to Powe's homicide, 17-year-old Breanna Eskridge, in July 2015. He also pleaded guilty in a plot to kill another witness from behind bars.

Smith's nephew and co-defendant in the trial, Shaheem M. Smith, 22, also entered a guilty plea Wednesday on a charge that he helped in the plot to kill the witness. He could be sentenced to up to 40 years in prison and get another 20 years of extended supervision.

Antonio Smith gave a halting plea Wednesday afternoon, stopping multiple times to confer with his attorney. Even after pleading guilty, he paused again when the judge asked if he was entering that plea because he had, in fact, committed the crime. He eventually answered with a simple "yeah."

Two other people charged in that witness plot, including Antonio Smith's former girlfriend, Shantrell Lyons, already have pleaded guilty and were set to testify against him.

Antonio Smith's co-defendant in the killing of Eskridge, Wynette McClelland, testified against Smith this week. McClelland pleaded guilty to a lesser charge and is scheduled to be sentenced Tuesday. Lyons is set to be sentenced the same day.

Prosecutors had a strong case against Smith, with a mix of witnesses who said — or were expected to say — he killed Powe, 35, and Eskridge and was orchestrating the plot to kill another witness. The case also featured cell phone records, jail calls and letters, and other records that implicated Smith.

The trial had been delayed repeatedly for various legal reasons. It was stopped again late last year when Antonio Smith had gallstones removed. The trial finally began Feb. 13 with Antonio Smith representing himself. On Tuesday, he turned over his defense to lawyer Tom Erickson, who had served as his attorney during pretrial proceedings and was by his side during the trial.

The courtroom was tense during the trial with extra sheriff's deputies and district attorney investigators deployed. At one point, Judge Joseph Donald admonished Smith not to make any gestures and not to look into the gallery at the victims' family members.

McClelland testified Tuesday she saw Smith fatally shoot Powe during an argument on a north side street two summers ago. McClelland, who had grown up with Smith, said he called her repeatedly after Powe's murder, saying she better not talk.

"He said if I do, the same thing that happened to EP was gonna happen to me," McClelland, 34, said.

She said Smith also asked her what Eskridge told police.

McClelland said about a week after Powe was killed, she dropped off Eskridge and her twin sister at a friend's house late one night. She said she knew Smith was following her and that he planned to kill Breanna Eskridge after she dropped them off. She said she was scared and that Smith threatened to shoot up her car if she didn't drop off the twins.

After he was locked up Smith orchestrated a plot to kill another witness, John Spivey, 48, from behind bars, according to court records. Smith enlisted his girlfriend, Lyons, his nephew, and another man to bail Spivey out of jail with a plan to kidnap and kill him.

But investigators from the district attorney's office, sheriff's office, and Milwaukee police department detected the plot and swept Spivey to safety, and arrested the others.

Lyons' testimony was among the most awaited of the trial and was expected in the next day or so. Assistant District Attorney Karl Hayes was expected to introduce numerous jail calls that Smith made to Lyons and others giving them instructions about what to do with guns used in the crime, how to handle drugs and how to get Spivey. Smith also wrote several letters to his mother and others trying to cover his tracks, which were expected to be shown the jury.

The case touched on several hallmarks of violent crime in Milwaukee — witness intimidation, heroin dealing and seemingly impulsive acts of violence with ready access to firearms. Those factors, among others, contributed to a historically deadly year in 2015 with 146 people killed. Last year, the city recorded slightly fewer homicides with 141 victims.