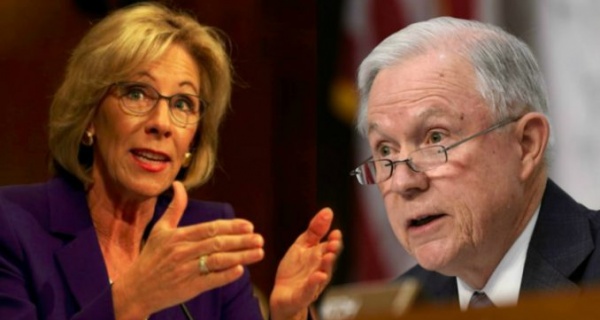 This first high-profile clash between members of President Trump's cabinet, whose supervillain bona fides are matched only by their breathtaking lack of qualifications for their respective positions, comes courtesy of newly-minted Attorney General Jeff Sessions and Secretary of Education Betsy DeVos. In a result that may surprise you, neither one of them managed to emerge looking good.

The dust-up preceded yesterday's announcement that the administration intends to roll back federal antidiscrimination protections for transgender students in public schools, a petty, cruel move that the White House cravenly couched as a "states' rights" issue to downplay the fact that their decision willfully does harm to children. The New York Times has some tantalizing details about how the powers that be reached this conclusion behind the scenes. (Hat tip Sopan Deb.)

Ms. DeVos initially resisted signing off on the order and told President Trump that she was uncomfortable with it, according to three Republicans with direct knowledge of the internal discussions. The order would reverse the directives put in place last year by the Obama administration to allow transgender students to use the bathrooms of their choice.

Mr. Sessions, who strongly opposes expanding gay, lesbian and transgender rights, fought Ms. DeVos on the issue and pressed her to relent because he could not go forward without her consent. The order must come from the Justice and Education Departments.

Mr. Trump sided with his attorney general, these Republicans said. And Ms. DeVos, faced with the choice of resigning or defying the president, has agreed to go along. The Justice Department declined to comment on Wednesday.

For Sessions, this isn't really a surprise. The former Alabama senator never even pretended to care about using the law to combat homophobia-motivated discrimination, and his contempt for the idea runs so deep that in 2009, while the Senate was debating the Matthew Shepard Act—a hate crime law that was literally passed in response to the brutal torture and murder of a gay 21-year-old college student—Sessions offered the following explanation for his opposition to the bill:

Today, I’m not sure women or people with different sexual orientations face that kind of discrimination. I just don’t see it.

When Sessions was nominated to be Attorney General, Department of Justice lawyers predicted that he would move quickly to undermine protections that the law afforded to LGBTQ individuals, and Tuesday marked his first victory on that front. Entrusting the enforcement of civil rights law to a man who doesn't care about civil rights is taking shape exactly as one might have predicted.

For DeVos, the takeaway is grim for a different reason. While Sessions served as a U.S. attorney, Alabama Attorney General, and a longtime member of the Senate Judiciary Committee, DeVos is an naïve rube who struggled during her Senate confirmation hearings to articulate basic concepts concerning modern education policy. The proposed order apparently bothered her enough that she held up its passage and even personally broached the issue with President Trump. But when the opportunity came for her to take a stand on behalf of students and show the doubters that she plans to be something other than a rubber stamp for the administration's initiatives, she elected to quietly roll over. In other words, this country is helmed by an attorney general who made it a top priority to enable discrimination against transgender schoolchildren, and a secretary of education who was too cowardly to do anything about.