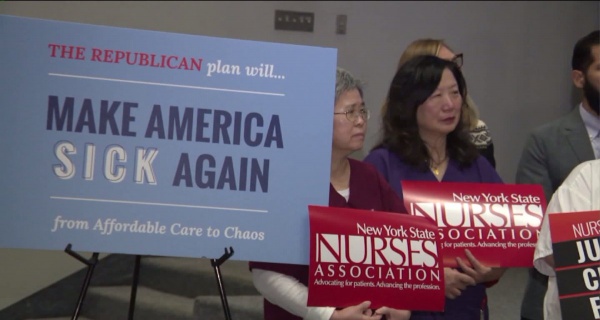 Republicans in Congress have been saying for months that they are working on a plan to repeal and replace Obamacare in the Trump era. Now we have the outline of that plan, and it looks as if it would redirect federal support away from poorer Americans and toward people who are wealthier.

A white paper drafted by House leadership and the staff of the House and Senate committees that oversee health policy details a structure that could replace large sections of the Affordable Care Act. Crucially, the proposal largely contains provisions that could be passed through a special budget process that requires only 50 Senate votes, and fulfills President Trump’s promise that the repeal and replacement of the law would take place “simultaneously.”

The plan would make major changes in how health care is financed for Americans who don’t get coverage from work. It would greatly expand the number of Americans who could benefit from federal help in buying health insurance, but it would change who benefits most from that support.

Obamacare, as the A.C.A. is known, extended health coverage to 20 million Americans through two main mechanisms. It expanded Medicaid coverage to Americans below or just above the poverty line in states that participated, and it offered income-based tax credits for middle-income people to buy their own insurance. Obamacare was a redistributive law, transferring money from rich to poor.

The Republican plan would alter both of those programs, changing the winners and losers. It would substantially cut funding for states in providing free insurance to low-income adults through Medicaid. And it would change how tax credits are distributed by giving all Americans not covered through work a flat credit by age, regardless of income.

That means that the biggest financial benefits would go to older Americans, like, say, Secretary of State Rex Tillerson. If he didn’t have a job in the Trump cabinet and access to government coverage, a 64-year-old multimillionaire like him would get the same amount of financial assistance as someone his age, living in poverty, and he would get substantially more money than a poor, young person.

The idea of matching tax credits to age makes some sense. Older people tend to have higher medical bills, and insurers, even under Affordable Care Act rules, charge them substantially higher prices. The new plan would also simplify the current system, which requires verifying every applicant’s income and then giving just the right amount of financial assistance. It would also eliminate incentives for low-income people to avoid earning more (higher earners can face a reduction in benefits).

But the current system is set up to ensure that low and middle-income Americans can afford the cost of their premiums. The Republican plan would not do that, and would result in many more low-income people losing out on coverage if they couldn’t find the money to pay the gap between their fixed tax credit and the cost of a health plan.

Older people without employer-based insurance typically earn more than young people, who tend to be starting out in their careers. It’s hard to know precisely how many people would lose coverage under this proposal because it’s missing some numbers. But similar tax credit plans from House Speaker Paul Ryan and Tom Price, the new secretary of health and human services, would result in millions losing coverage, according to independent estimates. (Mr. Ryan said Thursday in a news conference that the Congressional Budget Office was evaluating the new proposal, which means that we may see firm coverage estimates in the coming weeks.)

The plan includes additional features that redistribute resources from the poor to the rich. It would allow Americans to sock more money away for health spending in special tax-free health savings accounts. The benefits of such accounts fall largely to higher income-people who pay more in taxes, and a recent analysis of current health savings accounts found that they are held disproportionately by families with high earnings. (The white paper is silent on two Obamacare taxes that target wealthier Americans, but other Republican plans have proposed eliminating them. It does eliminate a number of taxes on the health care industry.)

What the plan doesn’t do, currently, is change any of the Obamacare regulations on health insurance that Republicans say drive up the cost. Those rules, including requirements that every plan cover a standard package of benefits, and those requiring companies to charge the same prices to healthy and sick Americans, would stay on the books, because they can’t be easily changed through the budget process.

Changing those rules could make insurance cheaper but would rankle many consumer advocates — and would require separate legislation, with 60 Senate votes. Under this proposal, the health plans would look largely the same, but the way the government helps people pay for them would change.

There’s still a lot subject to change, of course. Congressional leadership has said the bill, once completed, will proceed through committee hearings and amendments. And the politics of passing such legislation, even with Republican control of both houses of Congress, will be a challenge. But this proposal, with the imprint of every major committee working on health care, seems likely to set the terms of the discussion.

I wrote a few weeks ago about how all health policy decisions involve trade-offs, and it will be hard for President Trump to honor his promise of coverage that is “far less expensive and far better” than Obamacare. This plan is a good illustration of those challenges. It’s a simpler, potentially cheaper plan than Obamacare. But it’s far less generous to the poor, and unlikely to provide the health insurance for “everybody” that President Trump envisions.