Suspect In Killing Of Drug Kingpin Is Severely Beaten In Jail 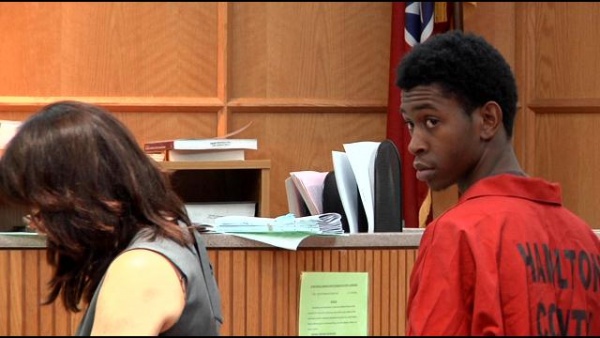 The inmates beat Jermichael Brooks so badly that officers had to guide the nearly blind 23-year-old man into a federal courtroom Friday.

Before the judge, Brooks pleaded not guilty to drug and gun accusations — but the charges assure he sits in jail while police build a high-profile murder case against him.

Investigators think Brooks killed well-known gang leader Jumoke Johnson, 23, and Christopher Woodard, 20, on Jan. 20, shooting them from the back seat as they rode in a car together, sources said.

Brooks hasn't been charged in the double homicide, yet, but three sources told the Times Free Press that Brooks is the prime suspect in the slaying, which may have been motivated by a cheating girlfriend.

The sources, who spoke on the condition of anonymity, said Woodard may have been having an affair with Brooks' girlfriend before the slayings.

A spokeswoman for Chattanooga police declined to comment Friday.

Both Woodard and Johnson were shot in the back of their heads. Woodard was hit eight times, while Johnson was struck four.

Three days after the double homicide, a task force of local and federal agents chased Brooks and another man across East Chattanooga after they were spotted in a stolen car.

When the car crashed into a ditch near 2200 Monroe St., investigators discovered two firearms and some cocaine inside. Both men were arrested and sent to the Hamilton County Jail.

The next day, Brooks was federally indicted on two charges stemming from the chase: being a felon in possession of a firearm and intent to distribute cocaine.

Five days later on Jan. 29, Brooks was beaten by other inmates in jail. His collarbone was broken, eyes severely injured, and shoulder bruised, sources said.

During his appearance in federal court Friday, defense attorney Giles Jones had to read the indictment to Brooks because he couldn't see it and had to guide Brooks' hand across a page to form his own signature.

Brooks, who is also known as "Blue Light," kept his head down, shielded by dreads, while addressing the court during the brief hearing, Jones said.

Jones could not comment on the allegations that Brooks was the shooter in the double homicide because he has no information on it, he said.

But it is clear that Johnson was a leader on the streets, a man known for his charisma and natural ability to influence others.

Hamilton County Sheriff's spokesman Matt Lea confirmed the Jan. 29 assault on Friday but would not comment on the extent of Brooks' injuries. He also would not say whether Brooks, who is still being housed in the jail, had been moved for his own safety.

Deputy Paul Salayko, a spokesman for the U.S. Marshals Service, which technically maintains custody of Brooks in the federal case, also declined to discuss the specifics of Brooks' confinement. But he said marshals take quick action to neutralize threats against inmates.

Brooks is being held without bond in state court, and appeared in federal court on the condition that he would not be released from custody until his state charges are resolved.

On the state side, he faces a probation violation for failing to provide documentation of employment, failing to pay fines and failing to show at home visits. He was also charged with domestic assault and theft in December — which is another violation of his probation, according to court records.

Brooks, Johnson and Woodard are all members of the same street gang, the Rollin 60s Crips, according to records and sources. Brooks and Woodard are friends with each other on Facebook.

Three days after Woodard and Johnson were killed, Brooks posted a status on his Facebook page in their memory. He said he'd never forget them.

Eighteen minutes after the post was published, the task force of agents began to chase Brooks, in the stolen car, across East Chattanooga.