Behind The Smoke Of Controversies, Trump Signs Executive Orders That Will Target Black And Hispanic Men 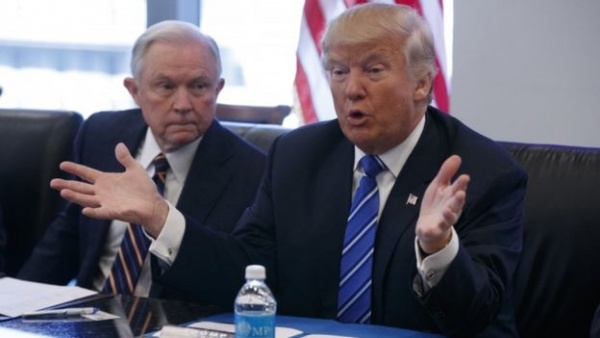 Donald Trump has signed three executive orders to deal with “public safety”, including handing more authority to the police.

At the formal ceremony to appoint Jeff Sessions as Attorney General, the President outlined the new mandate that Mr Sessions would have, including tackling crime, drug cartels and terrorism.

He insisted that the US faced the “threat of rising crime” and that “things will get better very soon”.

“I am directing the Department of Justice to reduce crimes and crimes of violence against law enforcement officers,” he said.

“It’s a shame, what has been happening to our great, our truly great, law enforcement officers. That is going to stop today.”

One of the executive orders seeks to “define new federal crimes, and increase penalties for existing federal crimes, in order to prevent violence” against state and federal police.

In 2016, a total of 135 police officers were killed in the US, a five-year high, according to a report from the National Law Enforcement Officers Memorial Fund. Around half of them – 64 officers – were fatally shot while on the job, including 21 who were killed in an ambush-style attack. The number also includes traffic accidents and job-related health issues, for example, heart attacks while working.

No mention was made by Mr Trump of the hundreds of people who die at the hands of law enforcement every year.

There were 968 deaths last year, according to The Washington Post, and more than 130 people so far in 2017, according to a database called killedbypolice.net

The executive orders were signed during Black History Month.

His speech comes just one month after the former administration's DoJ concluded that, in Chicago, residents had suffered a “pattern of excessive force” by police, experienced particularly within communities of colour. Chicago was just one city being investigated under former President Barack Obama’s government as shocking videos emerged that showed people such as Alton Sterling, Sandra Bland and Walter Scott being violently arrested or killed at the hands of police officers.

Civil rights campaigners say the new mandate under Jeff Sessions is unlikely to include continuing the former department's investigation on these deaths or follow through on policing reform.

The rate of police officers being indicted or convicted is extremely low.

At the swearing-in ceremony of Mr Sessions on Thursday, Mr Trump added that the three new executive orders, including ordering the Department of Homeland Security to “break the back of criminal cartels” and asking the Department of Justice to implement a task force to reduce violent crime, were giving a “clear sign” to criminals.

“Your day is over,” he declared. “A new era of justice begins and it begins right now.”

Mr Sessions, a longtime Senator from Alabama who was once deemed too racist to serve as a federal judge, told reporters that the US “has a crime problem”.

“I wish the rise that we're seeing in crime in America today were some sort of aberration or a blip,” he said.

“My best judgement, having been involved in criminal law enforcement for many years, is that this is a dangerous, permanent trend that puts the health and safety of America at risk,” he added.