How Does Small Town America Cope With Aggressive Policing? 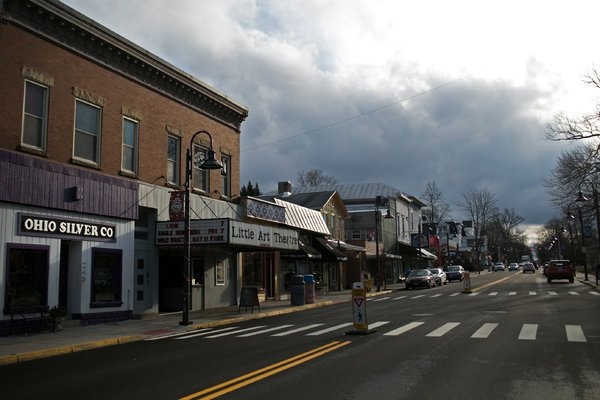 The scene was an all-too-familiar one on the streets of America’s cities: a black suspect on the ground, roughed up by white police officers as an angry crowd looked on.

But Yellow Springs is a tiny, predominantly white village, and the arrest at the annual New Year’s street celebration was an awakening to many who live here.

Dozens of residents criticized the police force on Facebook, accusing officers of carrying an “us versus them” attitude. Hundreds packed a gym for a special Village Council meeting to denounce the episode for, among other things, the psychological damage it had on their children. When the police chief, unused to such fury, offered his resignation, the audience cheered.

Issa Walker, 28, a Yellow Springs native who is black, wrote the hashtag #WhiteFolksHereAintHavinIt beneath a picture of the meeting he posted to Facebook.

But in the consensus over the need for less aggressive policing, there were subtle differences in perspective: White residents were complaining largely about the officers’ violation of social norms in a laid-back town, while black residents focused on what they saw as a racially biased force that targets them regularly.

“I don’t know if I would call it a coincidence that out of a majority white crowd, a black man would be the one to get tackled to the ground and Tased,” Mr. Walker said.

One challenge, several black residents of Yellow Springs said, is that residents are so extremely liberal-minded that it is hard for them to believe that racism exists here. Village leaders said that complaints about the police had been coming from people of all races and that they were analyzing data to determine whether police stops showed racial bias.

“I personally don’t believe that there was racial profiling or anything in town,” said Brian Housh, a councilman who is white and has strongly advocated a police overhaul, citing Black Lives Matter as an influence.

Yellow Springs, with about 3,500 residents, is a blue speck in the conservative sea of southwest Ohio. Anchored by Antioch College, a liberal arts school with Unitarian roots, the village long has attracted an intellectual, activist populace. This is one of the few places in the region where black people were allowed to own homes in the mid-20th century, but still, Coretta Scott King, who studied music and education at Antioch, could not find a student teaching position in Yellow Springs because she was black.

Its reputation is reflected in the rainbow flags flying along the main street, the fruity incense wafting onto the sidewalk from the local smoke shop and the people perched at sidewalk tables reading titles from a used-book store. While President Trump won the county, Greene, with 60 percent of the vote, Yellow Springs went for Hillary Clinton.

As 2016 came to a close, hundreds of residents crowded the main drag downtown, as they do every year, to ring in the new year by watching a disco ball lowered to the pavement.

Usually the police allow them to linger for about 45 minutes before walking through the crowd and asking everyone to call it a night, residents said. But this time, they said, officers began clearing the street just eight minutes into the new year. And they did so by driving their cruisers through the crowd, lights flashing and horns buzzing.

Tensions quickly rose, and several villagers approached the police vehicles to ask the officers what they were doing. One of those people was David Carlson, 29. The police say a drunken Mr. Carlson, who is black, had been swearing at the officers, threatening them and striking their car. There was no evidence to suggest that Mr. Carlson was being disruptive like that, one of his lawyers, Jon Paul Rion, said. An officer eventually hopped out of his car and slammed Mr. Carlson to the ground. Chaos ensued.

Mr. Carlson got away, and officers chased him. One tried to use a Taser on him, and a crowd of mostly white residents tried to shield him. One councilwoman, Marianne MacQueen, 72, who is white, was not arrested that night, but the authorities later charged her with two misdemeanors, saying she interfered with an arrest and obstructed official business. Ms. MacQueen said she had been trying to calm the situation.

The police charged Mr. Carlson with felony obstruction and misdemeanor theft, saying that he took an officer’s Taser — an allegation his lawyers denied. What the police saw as a justified arrest, many witnesses considered unnecessary police escalation. But the scene, so shocking to many of the city’s white residents, was less jarring to African-American residents, who make up a little more than 13 percent of the population.

Village leaders in Yellow Springs, which is roughly 81 percent white, said one reason they were so shocked by the New Year’s debacle was that they had been taking complaints against the police seriously and had already been working toward making changes.

Leaders have tried various measures to connect officers with the community. At each meeting of the village’s Human Relations Commission, for instance, a different officer (there are 11; 10 are white) showed up to introduce him or herself. But those meetings were poorly attended.

“It’s — how do we get them connected in a meaningful way besides these more symbolic kinds of things?” said Karen Wintrow, the president of the Village Council. “I believe that, when I talk to our officers, they do feel a kinship and an affection and a desire to serve this community. I think that they get overwhelmed with some of the negative rhetoric and don’t understand it.”

Residents said they used to be able to talk town gossip with their officers, but not anymore, now that most of the officers commute from conservative surrounding towns.

Three years ago, a sergeant was disciplined after taking a camera from a white woman filming police activity in front of her house. Last year, an officer was fired after two aggressive episodes — he shattered the window of a white woman sitting in a parked car and, days later, forced to the ground and handcuffed a white man who appeared “agitated” while walking down the street.

Many here said those approaches were unnecessary in a 2.5-square-mile hamlet with a low crime rate.

Since the New Year’s episode, proposals for changing the department have included replacing police officers with social workers, providing subsidies for officers to live in the village, and training officers in crisis intervention, implicit bias and the like. The village has named one of its current officers to serve as interim chief while it searches for a permanent replacement.

“We are stepping things up,” Mr. Housh said. “We’re going to be more vigilant and involved.”

There remains ambivalence, however, over the role that race plays in the town’s policing.

Some hoped that what happened on New Year’s Day would make issues of race and policing real to those who did not experience them.

“We didn’t have enough skin in the game when it was going down with folks who were more disadvantaged,” said Dr. F. Stuart Leeds, who is white. “It’s time to see ourselves as a united community and to express regret for minimizing pain and suffering caused by this type of activity in the past.”