White Nationalist, Steve Bannon, Is Running The Country Behind The Scene 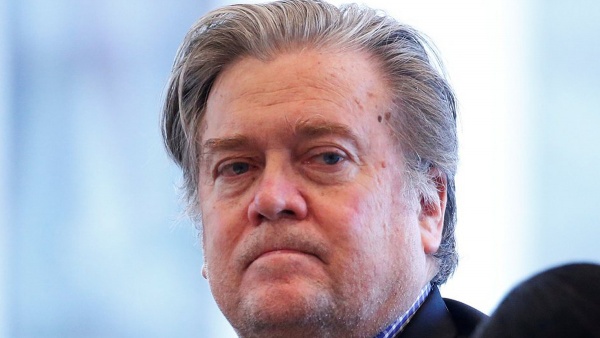 Donald Trump is just a puppet who doesn’t care about anything.

If Donald Trump has shown anything during his first eleven days in office, it's that he's a coward with no ideas of his own, who is more than happy to be a puppet for the true president of the United States: Steve Bannon. Sure, Trump acts like he's in charge, but that's because he's too dumb to realize that Bannon is so obviously pulling the strings that he's become a joke. A real, impressive winner (not a Fake! Sad! Loser! like Trump) would recognize he's being manipulated by a power-hungry jackass who is actively trying to destroy the founding principles of this nation. And what's truly crazy is that that statement isn't even slightly hyperbolic.

Steve Bannon is making far-reaching and unprecedented decisions in this White House and is undermining the basic checks and balances that you learned about in junior-high civics class. For example, he was the architect of Donald Trump's horrific "Don't call it a Muslim ban even though I call it a Muslim ban" Muslim ban, and when the Department of Homeland Security's lawyers concluded that the ban should not include people who hold green cards, Steve Bannon apparently personally overruled them.

And, as if that weren't enough, in an unprecedented move, Steve Bannon has been appointed to the National Security Council even as the chairman of the Joint Chiefs of Staff and the director of national intelligence were demoted. And lest you think this isn't a big deal, take The New York Times’s word for it:

...who sits at the National Security Council table when the administration debates issues of war and peace can make a real difference in decisions. In giving Mr. Bannon an official role in national security policy making, Mr. Trump has not simply broken with tradition but has embraced the risk of politicizing national security, or giving the impression of doing so.

So now, a man who is a political animal and an amoral opportunist, who years ago said that his goal is to "destroy the state" and "bring everything crashing down, and destroy all of today’s establishment,” is now going to be an even bigger voice in shaping U.S. foreign policy. And lest you think he's changed his mind since then, here's what he said YESTERDAY to The Washington Post about attorney general nominee and noted racist Jeff Sessions.

“Throughout the campaign, Sessions has been the fiercest, most dedicated, and most loyal promoter in Congress of Trump’s agenda, and has played a critical role as the clearinghouse for policy and philosophy to undergird the implementation of that agenda. What we are witnessing now is the birth of a new political order, and the more frantic a handful of media elites become, the more powerful that new political order becomes itself.”

He's casually throwing around phrases like "new political order" as if they aren't terrifying when paired with him running roughshod over the rights of...well, everyone who isn't a rich, white, straight male. And if you still think Trump is actually in control, here's what Bannon said of his so-called boss last year:

"[Donald Trump is a] blunt instrument for us,” he told me earlier this summer. “I don’t know whether he really gets it or not.”

So there you have it. A man who wants to "destroy the state" and who basically bragged that he was manipulating Trump to his own ends has already, in only eleven days, risen to an unprecedented level of influence for someone in his position. He's already overruled entire departments of government and unseated qualified security experts on the NSC. So we should get some slimy photos of Steve Bannon ready for those junior-high civics classrooms. After all, they usually have photos of the presidents on their walls.