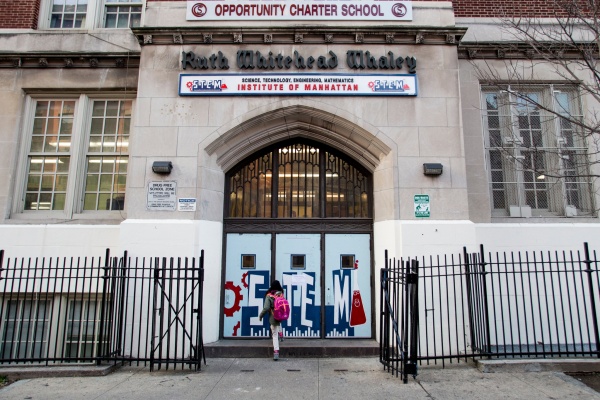 Some of the best public elementary schools in New York City are in Community School District 3, on Manhattan’s West Side. At those schools, the vast majority of children pass the annual state tests, gifted and talented programs buzz with activity, and special programs attract promising young musicians or families who want a progressive approach to education.

But none of those schools are in Harlem.

In District 3’s Harlem schools, there are no gifted and talented programs. Of the six elementary schools there where students take the state tests, only one comes close to the citywide passing rates of 38 percent in reading and 36 percent in math. At one school, only 6 percent of third- through eighth-grade students passed the most recent math tests.

The New York Times has been examining the district over the past few months to look at the forces that shape the racial and economic makeup of the city’s schools. Unlike in many parts of the city, in District 3 — which runs from 59th Street to 122nd Street along Manhattan’s western flank, then takes a dogleg into Harlem — people from different races and socioeconomic levels often live near one another. The district’s schools, however, are sharply divided by race and income, and diverge just as sharply in their levels of academic achievement.

Nowhere is that tale of two districts clearer than in Harlem.

While the high-performing schools on the Upper West Side are generally at capacity or overcrowded, enrollment at the Harlem schools has been falling as parents abandon the traditional public schools in favor of higher-performing charter schools. There are now nine in the district, eight of them in Harlem. White families, who have moved into the area in increasing numbers, generally do not send their children to the neighborhood schools, district or charter, leaving them deeply segregated. And neither the Education Department nor the district superintendent has put forth a comprehensive plan for how to lift the Harlem schools’ academic performance.

Instead, in October, the department proposed effectively closing one of them, Public School 241, the STEM Institute of Manhattan, which has been struggling academically and shedding students for years. There are just 128 students in kindergarten through fifth grade — in a school that a decade ago held 582 children and went up to eighth grade.

The department planned to merge the school into nearby Public School 76, the A. Philip Randolph School, and then redraw school zone lines to redistribute parts of P.S. 241’s zone to other schools.

Despite the STEM Institute’s poor performance, the plan was met with protests in the neighborhood. At contentious public hearings on the proposal, Harlem parents said they felt ignored by the department and the Community Education Council, the elected board that must approve new zone lines.

At a meeting in November, Felicia Harrison, the mother of a fourth grader at the STEM Institute, asked why in the case of a proposed rezoning in the southern part of District 3 parents had been given a year and a half to debate new zone lines, while she and other Harlem parents had been notified of the proposed merger of the schools less than two months before it was to be voted on.

“Why were we not given the same respect as the downtown parents?” she asked, eliciting applause and shouts of “Why?” from other parents in the audience.

The complaints prompted some members of the council, most of whom live in the southern part of the district, to express regret for neglecting the problems facing the Harlem schools.

“We’re all going to have to be able to look at ourselves and say what it is that we didn’t do and what it is that needs to be done,” one member, Daniel Katz, said at a meeting on Dec. 14. “I think the first step is definitely to shut up and listen, because we’ve got a lot of listening to do.”

In the wake of the protests, the department dropped the merger proposal, at least for the moment.

Some observers blame the struggles of Harlem’s traditional public schools entirely on the increasing number of charter schools in the neighborhood, saying that the administration of former Mayor Michael R. Bloomberg fostered the growth of charters while doing too little to help the traditional public schools compete with them in recruiting families.

“The schools up here were put in a situation by previous administrations where they were told, ‘Compete for students,’” Mr. Katz said at the Dec. 14 meeting, “and then the people who told them to compete for students walked away from helping them compete.”

Another council member, Noah Gotbaum, said at a meeting in October that the STEM Institute, then known as P.S. 241 Family Academy, had been successful until the Education Department put the Success Academy Harlem 4 charter school in the building in 2009. He said that the Success school had siphoned off families and resources from P.S. 241.

“A thriving public school that we had is now closing because of a charter school,” Mr. Gotbaum said.

That does not fit the facts. The Education Department first moved to close P.S. 241 for a combination of low enrollment and poor performance in 2008-09. It ultimately backed down after the teachers union filed a lawsuit. However, while he was forced to give the school a reprieve, the chancellor at the time, Joel I. Klein, hardly seemed to be rooting for it to succeed, sending a letter to parents there urging them to “seriously consider” applying to the Success school or to the other zoned schools in the neighborhood.

The percentage of neighborhood children who choose to enroll at the STEM Institute and three other nearby district public schools is much lower than at most schools in the southern part of the district. Last year, less than a quarter of the kindergartners who were zoned to attend those schools and went to public school enrolled, according to the Education Department. (The department does not track how many children go to private school.) By contrast, Public School 87, the William T. Sherman School, on West 78th Street, last year attracted 89 percent of the kindergartners who lived in its zone and attended public school.

Many of the neighborhood’s black and Hispanic families choose charter schools, which have higher test scores and long waiting lists. At Success Academy Harlem 4, 94 percent of the students who took the latest state math test passed it. Other families go to private schools or to public schools in other parts of District 3, like Public School 333, the Manhattan School for Children, a non-zoned school on West 93rd Street with a progressive approach that is open to anyone in District 3 and admits students by lottery. Last year it received 975 applications for 100 kindergarten seats and had a waiting list of more than 600 families.

Kim Watkins, the chairwoman of the Community Education Council’s zoning committee, is zoned for one of the Harlem district schools, Public School 149, the Sojourner Truth School, but sends her daughter to a gifted program elsewhere in the district. P.S. 149 is in the city’s Renewal program, which aims to rapidly improve low-performing schools.

Ms. Watkins said that when she toured P.S. 149 three years ago, she had thought it was not rigorous enough and lacked many of the benefits that exist in middle-class schools. In addition, Ms. Watkins said of her daughter, “she would have, frankly, been the only white kid in the class — I was concerned about that.”

The district’s superintendent, Ilene Altschul, suggested at the Dec. 14 education council meeting that the main reason families were not choosing the Harlem schools was not low test scores, but a failure to “get the word out about the amazing programs that are going on in all of our schools.”

She noted steps that some of the schools were taking to improve their performance, including the hiring of an academic coach to work with teachers at the STEM Institute and the hiring of a math consultant and a new writing curriculum at P.S. 149. She noted that P.S. 149 had also recently added programs in dance, singing, soccer, in-line skating and robotics.

But more than two years after its academic struggles earned it a place in the Renewal program, P.S. 149 has not yet made clear progress on the goals set for it by the city. In the last school year, its first under a new principal, its attendance and performance on the reading exams improved while its performance on the math exams declined slightly.

Charles DeBerry, the principal of P.S. 76, the school that was set to absorb the STEM Institute, said he felt outgunned by the promotional efforts of charter schools, especially the Success Academy network, which has three schools in District 3 and has spent millions of dollars to recruit students for its schools across the city. (The Success network now has 41 schools in four boroughs.)

“We’re certainly not working with the advertising budget that some of the charter schools have,” he said.

Dr. Inyanga Collins, a physician whose daughter has attended P.S. 76 since prekindergarten and is now in sixth grade, said that while P.S. 76 had many high-needs students, she felt it worked well with them. (The school has a partnership with the Harlem Children’s Zone, which provides a teaching assistant or an aide in every class.) She said she would like to see parents at the school be more involved.

“I feel as though the school is doing their part — we as parents have to step up and do our part,” she said. Of the proposed merger, she said, “This has been a wake-up call that this could all be gone, just like that.”

Two of the Harlem schools have had somewhat better success in attracting families: Public School 180, the Hugo Newman College Preparatory School, which has a Spanish dual-language program and has drawn an increasing number of middle-class parents in recent years, and Public School 185, the Early Childhood Discovery and Design Magnet School, which offers an early childhood robotics program. P.S. 185 goes through second grade; it shares a zone with P.S. 208, the Alain L. Locke Magnet School for Environmental Stewardship, which goes from third to fifth grade.

Clara Hemphill, the editor of InsideSchools.org, which reviews schools and advocates greater integration, has been studying District 3 closely.

Ms. Hemphill said that schools like P.S. 149 and P.S. 241, which both have relatively new principals, should be given time to improve, but that it might ultimately be easier to start a new school than to turn failing ones around. She said she thought the district should try to replicate the Manhattan School for Children uptown.

“That’s a kind of school that would be very popular among parents in the northern part of the district and would have a chance of being a racially integrated school, which we desperately need,” she said.