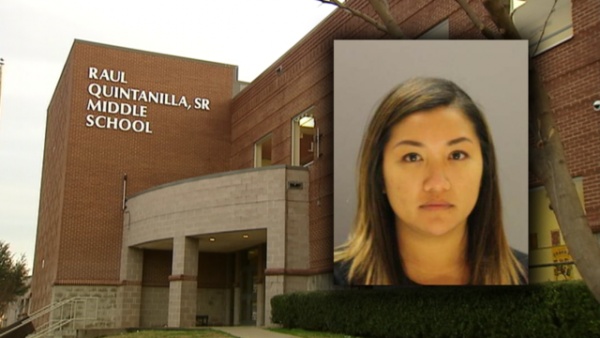 A Dallas ISD student got a middle school teacher to pay him nearly $28,000 by threatening to expose their sexual relationship to police, court records say.

Earlier this month, the boy's mom reported that he was getting from Doan "large amounts of money" he was using for "illegal purposes" and causing problems at home, the affidavit states.

The mom told the school's administration that she wanted the payments to stop. She also handed over screen shots of messages that indicated her son had asked for the money and Doan had said she didn't have any, police said.

"Anit [expletive] watch ima start getting the pics and everything ready ... to show the cops right I anit playing," the messages read, according to police.

Doan is listed on the school district's website as a cross country and soccer coach.

She told police she communicated with the boy over Instagram, text and the messaging app Kik before they had sex at a park in the summer of 2015. She said they also had sex between November and December of that year, her affidavit states.

In January 2016, she said, someone she didn't know contacted her and threatened to tell police about the relationship if she didn't give him money. She said she continued to get calls from different numbers about different drop-off places for the payments.

Doan had sex again with the student in December 2016, her affidavit states.

Doan was arrested on Friday and released from jail after posting bail.

The boy's mother told KDFW-TV (Channel 4) this week that he has been in and out of the juvenile system on burglary and robbery charges. The mother told the station she knows her son was wrong but she believes Doan should have known better as the adult in the scenario.

'She did very bad. She did bad," the mother said, "and I'm not condoning what he did because I know he was wrong at what he also did because blackmailing is not acceptable."