Trump's Web Of Lies Are Nonstop 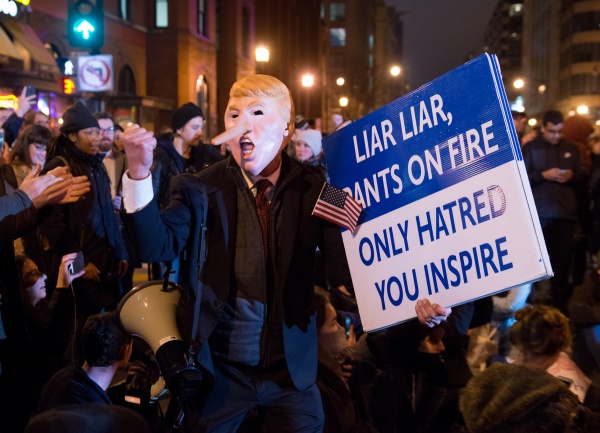 He’s a committed and habitual liar, though I’m honestly not sure he knows it. If he does know, he doesn’t care. This is uncharted territory for an American President, but it’s nothing new for Trump.

It wasn’t new when he announced his run at Trump Tower, where his cheering “supporters” were mostly extras paid $50 a head by casting company the Extra Mile. Trump, being Trump, didn’t disclose those payments, the Federal Election Commission found last year.

Trump got his start in Manhattan with Midtown’s 26-story Commodore Hotel, where, with nothing more than moxie, a “small million-dollar loan” from his father and, aided by his family name, a partnership with the Hyatt Corporation, he lifted the building up by its bootstraps into the 34-story Grand Hyatt, complete with what he falsely said again and again was the biggest ballroom in Manhattan.

But Trump didn’t add floors to the building, just numbers to its elevator panels. Which became a trademark of sorts. At the 58-floor Trump Tower, the elevator goes up to 68. At the 72-floor Trump World, to 90.

How well Trump did peddling bigness and glitz at premium prices, we don’t know. Nor do we know how much money he’ll make for himself as President. Breaking with post-Watergate American tradition, he’s refused to release his taxes, though we do know thanks to dogged reporting that he paid no federal income taxes in a couple years in the late 70s and again in 1984.

And that, after his businesses in Manhattan and Atlantic City collapsed in a series of bankruptcies, he declared a loss in 1995 so big that he’s likely still not paying income tax two decades later.

And that Trump lies: about his ratings, his worth, even about his previous lies.

Sometimes, those lies are amusing in a grotesque sort of way, like when he went on at a primary debate about how his plainly small hands are, in fact, big, and vouched, unsolicited, “I guarantee you there’s no problem” with the bigness of another body part.

More often, they’re horrific, like when he talked about seeing from his Trump Tower penthouse the people falling from the Twin Towers four miles away on 9/11, and about the “hundreds of friends” he says he lost, and about the hundreds of workers he says he dispatched to help who no one else ever saw, and about the Muslim mobs he and he alone saw celebrating in New Jersey.

This is a man who sees the murder of 2,996 Americans as a story about Donald Trump, and his bigness.

And now he’s our President. That’s an incredible accomplishment, one he achieved in spite of being outspent, widely mocked by the smart set and furiously fought by the forces of the status quo in both political parties and the mainstream press and Hollywood.

That’s not enough for a man who always wants more, our real-life clay-boy-in-chief. The guy who said he’d be “so presidential you people will be bored” is the same one he’s always been, in no way transformed by the office but emboldened by the lies that helped get him there to tell more of them. The White House, like everyone and everything around Trump, will be diminished to help make him look bigger by comparison.

Despite knowing he needed a mudslide to carve out a path to victory, Trump is furious about his popular vote shellacking (and is now lying about “voter fraud” to insist he really won it), his pathetic inaugural crowd and his historically low approval numbers.

So he’s offering us what can only be called a Russian nesting doll of lies, starting on day one when — days after comparing the intelligence community to the Nazis — he went to the CIA’s Wall of Stars, honoring the unnamed agents who’ve died in its service, who Trump mentioned only in passing while riffing for 15 minutes about his bigness and lying about the media’s accurate reporting on his sparsely attended inauguration. His bizarre remarks were met with big applause, which, CBS news reported, came mostly from Trump’s own staffers.

As his lies pile up, with the muscle of the state behind them now, don’t get tangled up in each one as he moves on to the next one, but do remember that the President is a liar. Trust your ears and eyes, not his words.

If he tells you we’re going up to the 34th floor, look out the window when you get there and count for yourself.