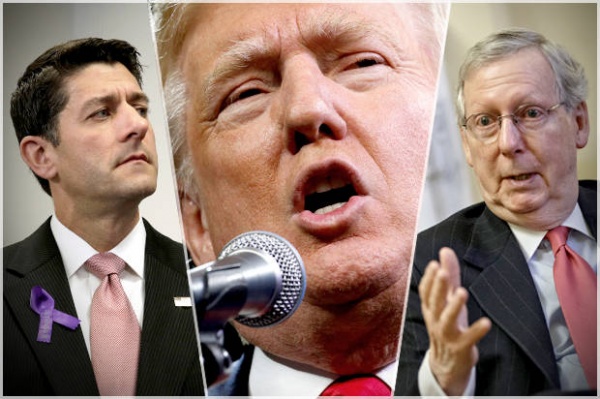 The Post’s Mike DeBonis has obtained leaked audio of Republicans at a closed-door session airing serious anxieties about the GOP’s strategy to repeal and replace Obamacare. What’s remarkable is how decisively their specific comments in private undercut the party’s public, carefully-crafted talking points about the battle to come.

Now, to be clear, these private comments reveal Republicans actually wrestling with the policy challenges that repeal (and replace) will create, which is a good thing as far as it goes. However, in so doing, they basically admit in various ways that Republicans will be responsible for the mess that repealing the law — which would probably be done on a delay while Republicans come up with a replacement — is expected to make.

Senators and House members expressed a range of concerns about the task ahead: how to prepare a replacement plan that can be ready to launch at the time of repeal; how to avoid deep damage to the health insurance market; how to keep premiums affordable for middle-class families; even how to avoid the political consequences of defunding Planned Parenthood, the women’s health-care organization, as many Republicans hope to do with the repeal of the ACA.

“We’d better be sure that we’re prepared to live with the market we’ve created” with repeal, said Rep. Tom McClintock (R-Calif.). “That’s going to be called Trumpcare. Republicans will own that lock, stock and barrel, and we’ll be judged in the election less than two years away.”

The notion that Republicans will have “created” the state of the market that results after repeal, and that they will “own” that outcome, is refreshing to hear. Republicans have employed a series of overwrought formulations and tortured metaphors that are designed to suggest that, because Obamacare is already allegedly collapsing, Republicans are merely stepping in with a “rescue mission” to arrest that damage, while building a “bridge” to an as-yet-unspecified replacement. The game there has been to preemptively lay the groundwork to claim later that whatever consequences are unleashed by repealing the law were already in motion, and were not created by repeal itself.

This is not to deny that Obamacare is going through some difficulties right now. But the Republican rhetoric about its supposed collapse and implosion is just nonsense. For a good, balanced look at the situation, see this piece by Jonathan Cohn. As he reports, while experts are by no means unanimous on this conclusion, a number believe that the ACA marketplaces are generally stable. They say that much of the criticism is based on cherry-picked evidence and that the doomsday talk is overblown (the supposedly soaring premiums are actually where they were expected to be) or absurd (the notion of a death spiral is belied by robust enrollment). They add that the most immediate threat to the law is Republican efforts to gum up the works, say with executive actions by President Trump, or through repeal on a delay that leads insurers to exit the marketplaces because of uncertainty that any GOP replacement will ever materialize.

Behind closed doors, Republicans are admitting that such an outcome will be their own creation. (In fairness, some, such as Pete Sessions, are also saying this publicly.)

Also note this from the leaked audio:

Sen. Rob Portman (R-Ohio) warned his colleagues that the estimated budget savings from passing the Obamacare repeal bill — which could approach a half-trillion dollars — are needed to fund the costs of setting up a replacement. “This is going to be what we’ll need to be able to move to that transition,” he said.

Portman seems to be suggesting that Republicans face real danger in repealing the law, because so doing would also repeal its tax hikes — yet Republicans will need that revenue to pay for any replacement coverage. The implicit admission here is that it will be very hard for Republicans, having repealed the ACA, to pass a replacement that, in effect, would require new spending — and a way to pay for it. Yes, it turns out that to cover people, we have to spend money, and yes, that money has to come from somewhere.

Republicans have worked very hard to obscure whether their eventual replacement will cause those who have coverage now under Obamacare to lose it. They have done this by suggesting that no one will lose coverage during the transition, without saying whether they will lose it under the eventual GOP replacement. Trump himself has said that “everybody” will be covered under the GOP plan that replaces the ACA, and in early January, top adviser Kellyanne Conway also flatly stated this to be the case. But then Conway subsequently fudged that promise, saying instead that everyone would have coverage “during the transition time,” which doesn’t mean under the GOP replacement. Yet here you have Rep. MacArthur flatly admitting that an outcome which involves widespread loss of coverage is very possible.

To reiterate, it is useful to see Republicans wrestling with the fact that repeal (and replace) will bring major challenges and could produce a terrible outcome in humanitarian terms. But we have to ask: Given that Republicans have supposedly been preparing for the chance to repeal (and replace) the ACA for years, why do they seem so surprised by this?