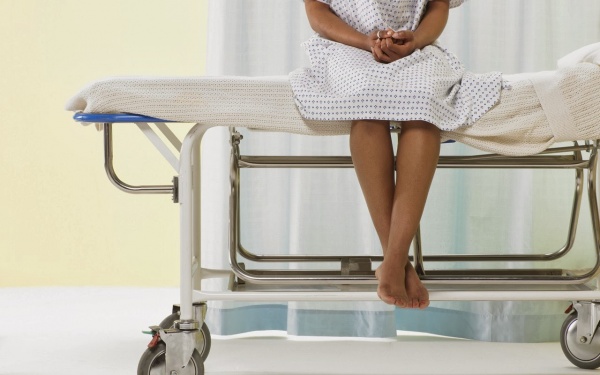 There's a huge racial disparity when it comes to cervical cancer in the United States.

Black women are dying of the cancer at twice the rate of white women — with death numbers comparable to those of women in many developing countries, according to a new study published Monday in the journal Cancer.

Until now, doctors had thought the racial gap was narrowing, given that cervical cancer death rates for black women were dropping. The new study, however, found that the disparity is even larger than previously believed.

"This is a preventable disease, and women should not be getting it, let alone dying from it," Anne Rositch, the lead author of the study and an assistant professor of epidemiology at the Johns Hopkins Bloomberg School of Public Health, said in a statement.

"These findings motivate us to better understand why, despite the wide availability of screening and treatment, older and black women are still dying from cervical cancer at such high rates in the United States," she said.

Women can get cervical cancer if they are infected with certain types of Human papillomavirus (HPV), a common sexually transmitted infection. Of the more than 100 types of HPV, most are benign, but about a dozen can lead to cancer.

Through routine Pap smears, doctors can detect changes in the cervix before cancer develops, or spot the cancer early when it's still in its most curable stage. Girls ages 9 to 13 can also get an HPV vaccine for two of the most common cancer-causing strains.

But many women — particularly poor women of color — still don't have access to basic, quality screenings, either because such services aren't offered locally or are too expensive, or because women lack the necessary insurance.

Cervical cancer kills about 4,000 women in the U.S. and 270,000 women globally, according to recent estimates.

Some doctors said they worry access to services could shrink even further under the Trump administration, given the expected repeal of the Affordable Care Act and likely funding cuts for family planning clinics, which provide inexpensive screenings.

"We have screenings that are great, but many women in America are not getting them. And now I have even more concerns going forward," Dr. Kathleen Schmeler of the University of Texas M. D. Anderson Cancer Center, who was not involved with Monday's study, told the New York Times.

The new research doesn't mean that more women are dying from cervical cancer in the U.S.

Instead, the epidemiologists changed the way they calculated the death rates to give a more accurate analysis of health data from 2000 to 2012.

Earlier studies put the rates at 5.7 for black women and 3.2 for white women.

The new figures are substantially higher because the researchers did not include women who had their uterus and cervix removed — a step that eliminated their risk of developing cervical cancer. Black women are more likely to have had this surgery than white women, since black women are more susceptible to having benign fibroid masses form in the uterus.

As a result, previous calculations underestimated the racial disparity in death rates between black and white women by 44 percent, the epidemiologists found.

The study does not explain the exact reasons why older and black women are dying at higher rates from cervical cancer. Perhaps patients didn't get a proper screening, or there wasn't a follow-up exam after an abnormal screening test, or the treatment was ineffective, the researchers suggested.

"While trends over time show that the racial disparities gap has been closing somewhat, these data emphasize that it should remain a priority area," Rositch said. "We need to put in place measures to reverse the [racial] trend."