Coretta Scott King Blazed A Trail With Elegance And Class 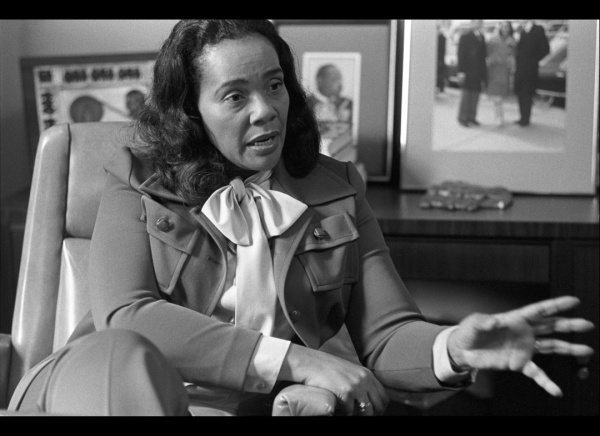 When I first set eyes upon her, she was seated in the pulpit of a small red brick church surrounded by luminaries—an ecumenical gathering of clergy and civil rights leaders from around the world. Then-President Bill Clinton delivered a rousing address as the congregation, pressed shoulder-to-shoulder in the freshly polished pews, repeatedly leapt to its feet with applause.

They had come to celebrate the 67th birthday of her slain husband, Dr. Martin Luther King Jr., and it had only been 10 years since the recognition of a national holiday in his honor. His tomb, situated in an outer courtyard between the church and the King Center offices, is enshrined above an ever-flowing fountain and adorned with a flame that never goes out.

As concerned as Coretta Scott King had been about eradicating poverty and advancing equal rights abroad, she never forgot that there was work yet undone here in the U.S. For her, the torch always burned bright. A posthumous memoir, My Life, My Love, My Legacy, was released by journalist Barbara Reynolds. The book, as told to Reynolds over the course of 30 years, sheds light on her life and gives new voice to a woman who had been anything but silent.

It was in 1986 that she wrote a scathing nine-page letter to the Senate Judiciary Committee, which at the time was considering the nomination of an Alabama attorney general to the federal bench. In the document, unearthed by The Washington Post, Coretta denounced now Senator Jeff Sessions, saying, “Anyone who has used the power of his office as United States attorney to intimidate and chill the free exercise of the ballot by citizens should not be elevated to our courts.”

She had known men like Sessions, men from the Deep South, who worked to maintain systems of inequality—all the while smiling gingerly at their colleagues and constituents. That rebuke, including allegations from others involving racial epithets purportedly used by Sessions, sank his bid.

Walking down Beale and Peabody streets, one can only image what Coretta might make of Sessions’s current nomination to become the country’s chief law enforcement officer. The election of Donald Trump to the presidency might have evoked difficult feelings for the late civil rights leader. In the 49 years since she and her husband walked these same avenues, the nation remains divided in significant ways.

There is a new Smithsonian museum devoted to African-American history in Washington, but workers across the country are still fighting for fair wages and the move to repeal the Affordable Care Act is already underway in both houses of Congress. Voter suppression and anti-immigration statutes are pervading state legislatures from sea to shining sea. Today, there are more black people in jail, on probation or parole today than were enslaved in 1850.

Then too, even after a national outcry, lead continues to contaminate the water in Flint, Michigan, and it is unlikely that the officer who killed Eric Garner will ever face criminal prosecution. The police officer who shot an unarmed 12-year-old in a snowy park in Cleveland, Ohio, is a free man today. And there is a president-elect who once pledged to ban Muslims from traveling to the U.S. That same man, a former reality show personality, took to social media Saturday morning to deride and mock one of Coretta’s closest friends and allies in the movement.

One has to wonder what she might have said about Trump describing Congressman John Lewis as “all talk, no action” and Atlanta, the city she loved so dearly, as falling apart and infested with crime.

Seated in a center pew at the annual ecumenical service that January morning in 1996, jubilation filled the sanctuary of Ebenezer Baptist Church. Dr. King and his father were both once senior pastor and I could feel the weight of the moment. For months or years, I did not know then, but Coretta would not be with us long.

Despite her pleasant and approving smiles, a fog of loss seemed to surround her. Coretta’s father-in-law had been laid to rest on that very altar in 1984 and his wife Alberta was murdered a mere six years after their son Martin, in 1974, as she sat at the organ. I was invited by Dr. Bernice King, the youngest daughter of Martin and Coretta, to address the 2016 King Memorial Service. I took the opportunity to laud the life of Brother Martin, but it was Coretta who was pressing on my spirit.

They were married in 1953 and, today, Coretta is largely remembered as the wife of Martin—the “First Lady of the Civil Rights Movement,” a moniker that does not fully speak to her critical role both before and after Dr. King’s death. Even as she worked to ensure that his message would continue to be heard the world over, after his assassination Coretta’s own activism took flight anew. She was, after all, an experienced, surefooted organizer.

It was here in Memphis, on April 8, 1968—five days after his final sermon from the pulpit of Mason Temple and four days after Dr. King was felled by a sniper’s bullet at the Lorraine Hotel—that the grieving widow picked up her husband’s baton. Coretta, joined by her four young children, led a silent march of 42,000 people through the streets in remembrance of her husband and in support of the ongoing sanitation strike. Negotiators sent by President Lyndon Johnson and led by Labor undersecretary James Reynolds struck an agreement between the city of Memphis and black sanitation workers, ending the months long, bloody campaign.

An estimated 100,000 people attended memorial services at Ebenezer and Morehouse College, Dr. King’s alma mater. Coretta would later found the Martin Luther King Center for Nonviolent Change and take up the fight for human rights around the globe.

She became an advocate for women and LGBT rights, as well as one of the leading voices against South African apartheid—becoming a close confidante of Nelson Mandela. In 1994, Coretta led a delegation from the King Center to help monitor that country’s first free and fair elections. I wonder now what she might have said about this one.

Then too, I wonder what she might have said about the scourge of gun violence on our streets and the notion that 13 million children still face hunger in wealthiest nation on the planet. I wonder, even now, what she would have said about the election of the first black president, Barack Obama, and his farewell speech after two terms in office.

Coretta suffered a stroke in 2005, two years before the launch of the presidential preference primary. Already getting around in a wheelchair, she was paralyzed along her right side and lost the ability to speak. She passed away, five months later, of respiratory failure—a complication from ovarian cancer. Four of the five living U.S. presidents descended on Atlanta for her funeral.

Had she lived to see this day and had been able to speak, of this I am sure: Eloquent and imbued with grace, Coretta would have had something to say about all of it. She would have reminded us that her husband’s dream—and hers—remains unmet. She would want us to celebrate Dr. King’s life, not only with ceremony and song but with service.

Today, as I walked along the same route she took in April 1968-- three months before I was born-- I know she would have pressed us forward with urgency and again locked arms with those who believe we are and can be better.