Steve Harvey Meets With Trump, Causing A Firestorm Of Criticism 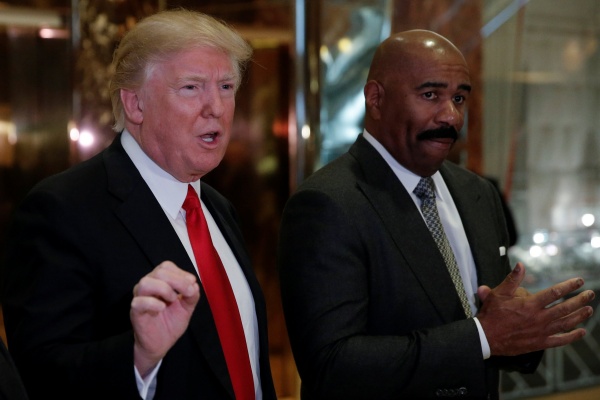 Steve Harvey shocked many by meeting with Donald Trump on Friday, sparking some sharp reactions to his possible role in aiding Ben Carson to “bring positive change to inner cities.” The Family Feud host shared his reasoning behind accepting the meeting upon exiting Trump Tower and in a written post shared via his Twitter account.

Harvey’s claim that President Obama urged the meeting with Trump hasn’t been confirmed by The White House according to the New York Times, but the meeting was meant to be an informal gesture between both transition teams heading into the inauguration:

“Well, you know it’s not my jump into politics,” Mr. Harvey said. “I ain’t gonna pass a background check. It’s just me following orders from my friend President Obama who said, ‘Steve, you gotta,’ as he told everybody, ‘get out from behind your computer, stop tweeting and texting and get out there and sit down and talk.’” The Trump team confirmed the invitation. The White House did not comment.

Harvey had announced his support for Hillary Clinton back in March, interviewing her on his radio show while saying “we’re going to put her back in the White House.” Following her defeat, it would seem that Harvey is attempting to be one to extend an olive branch to Clinton’s opponent before he enters the White House later this month. This did not sit well for many, including comedian D.L. Hughley who posted a fiery video on Instagram criticizing what he calls nothing but a celebrity photo-op:

“You’d rather have black people be football players, comedians, and rappers than the president. You’d rather see us run the ball than run the country.”
Hughley was joined by many others on social media, questioning the meeting and criticizing Harvey for his decision:

While Harvey’s meeting with Trump is likely the least of the concerns for the incoming administration, the response shows that people are divided on what the president-elect plans to do no matter who is involved. His past comments and actions have given him a reputation that’s hard to shake. The same can be said about Harvey too, of course, especially when you look at some of the more light-hearted reactions to Friday’s meeting.